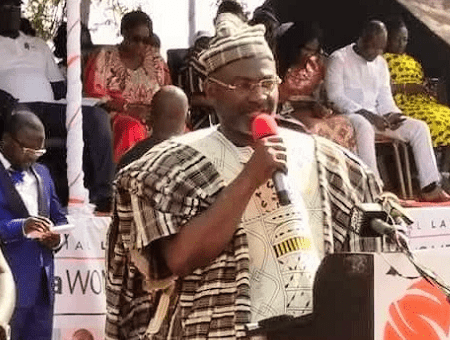 Honouring Celebs Who Give Back: Ghanaian Business tycoon, Politician, (NPP) philanthropist and Assin Central Member of Parliament, Kennedy Agyapong has been enstooled as development chief by the paramount chief of Lawra at a colorful ceremony at in the Upper West Region of Ghana. Hon Kennedy Agyapong’s new chieftaincy title Naa Kennedy Dery Agyapong.

The paramount chief of Lawra Traditional Area, Naa Puowelle Karbo III performed the ceremony. Kennedy Agyapong was honoured in recognition of all his amazing work, giving back to the community, character, attitude, his no-nonsense approach to business, his quest to help humanity especially the vulnerable in society.

Kennedy Agyapong was dressed in 3 layers of smock garments, a marching cap, and a walking stick  (symbolizing hischieftaincy) he was  placed on the stool 3-times, which is also very symbolic in most Ghanaian cultures. (As well as other African counties)

‘‘The Lawra traditional council has observed with admiration your remarkable philanthropic, charitable deeds to the people and communities across the country~ chief of Lawra Traditional

”I am short of words. The honour done me is overwhelming…‘It is not everybody that gets the opportunity to be honored in life whilst he lives; some are honored when they die. Some when they are dead is when people shower praises. I want to thank God for living to see how Ghanaians appreciate my effort… know I have stepped on lots os toes, because l try as much as l can to speak the truth. And in the course of that l know it hurt peoples feelings..” ~Kennedy Agyapong

Hon. is said to have donated ¢20,000 to support the activities of the NGO and a further ¢10,000 to the Lawra Traditional Council…

CELEBS WHO GIVE BACK

Kennedy Agyapong Donates 150,000 Face Masks To The presidency Of Ghana