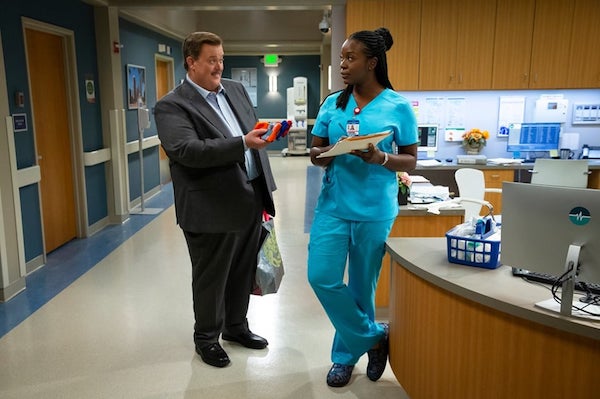 CBS launched a new sitcom less than a month ago, yet the entire country is talking about it! Chuck Lorre, Eddie Goredetsky, and Al Higgins – whom we all know from other successful tv shows like Two and A Half Men and Big Bang Theory – present Bob Hearts Abishola.

Before we talk about why it gained instant acclaim, let’s talk about the premise. Simply put, Bob is an average guy who runs a family-owned sock company.

When he is hospitalized one day, he is treated by Abishola, a hardworking nurse who relocated to the US from Nigeria with her aunt and uncle.

Despite the cultural differences and many other circumstances, Bob falls in love with Abishola and is determined to win her love.

Chuck Lorre says his idea for the sitcom was formed over a long time. He had always wanted to portray the struggles of an immigrant in America.

This idea was well-received by British- Nigerian comedian Gina Yashere, who is also close friends with Olowofoyeku and now the co-creator

Bob Wheeler is portrayed by Billy Gardell, an American comedian/ actor/ host. He mostly had recurring roles in Mike& Molly, Yes Dear, and My Name Is Earl.

We have a lot more ❤️ to give. #BobHeartsAbishola has been picked up for a full season. pic.twitter.com/9ejNbp3gjA

Abishola is portrayed by Folake Olowofoyeku, a Nigerian actress and musician.

Her face will definitely look familiar to some, as she partook in Broadway as well as TV shows like 30 Rock, Modern Family, and Westworld.

Believe it or not, Bob Hearts Abishola is the very first American sitcom to feature Nigerian cast members who can speak the Yoruba language.

In the first episode, Olowofoyeku sings a Yoruba lullaby for Bob to calm him down.

Not only does the show deal with the impact of different backgrounds, but it also investigates the struggles o an African immigrant who is qualified to work in the US.

The show has a growing fan base with over five million regular viewers. Chuck Lorre associates this with the theme of the show, universal love which is desperately needed.

It gained attention not only in the US but also in Nigeria, especially by Nigerian families.

The main reason is said to be the show’s success in capturing a traditional Nigerian family so that every family member can relate to the scenario.

Despite the increasing popularity, Bob Hearts Abishola received some negative reviews, as well. Some critics criticised the show for its cliche and outdated jokes about stereotypes and racism…

We’ve have been watching. Don’t miss out  check it out yourself!

Have been watching Bob Heart Abishola? Drop your comments below!