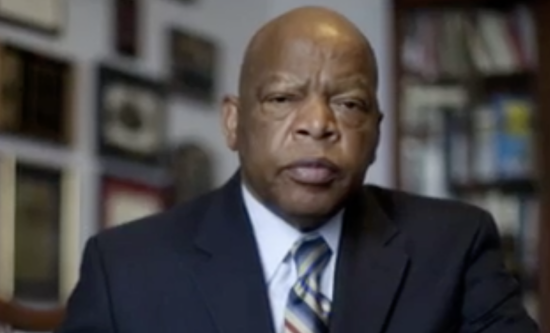 The world mourns the loss of Congressman John Lewis , one of its great leaders in governance today.

The news about his passing revealed that 80-year-old John Lewis was diagnosed with advanced pancreatic cancer in December last year. He  sadly passed away today, Friday July 17, 2020.

A statement released by his family paid a tribute to the late and recounted the memories of the deceased.

It stated that he played a significant role in the Democrat and American history making him a well revered icon. He was loving, carried a forgiving spirit and dedicated his life for non-violent activism as well as fighting for equal justice in American in his whole life.

Upon breaking the news of his death, tribute began trooping in from fellow politicians in America and around the world.

Nancy Pelosi, the speaker of the democratic party honoured John Lewis in a statement saying he was a man of valour and risked his entire life for freedom and justice in America.

In the last few weeks before his loss when America was engulfed with protests all over following the murder of George Floyed by police officers, he called for peaceful protest where he made his last appearance in the public.

Not many of us get to live to see our own legacy play out in such a meaningful, remarkable way. John Lewis did:https://t.co/KbVfYt5CeQ

Other tributes described the deceased as a true hero of America, he influenced a lot of lives and maintained his grounds for peace and justice. He will always remain in the hearts of loved ones in America.

John Lewis was a strong advocate and leader for the civil rights movement in America.

He was well known for leading the fight against discrimination and injustice against human beings especially blacks.

He also served as a member of the US House of Representative under the administration of the democratic party for over 30 years.

My friend, role model, and activist extraordinaire has passed. Congressman John Lewis taught us how to be an activist. He changed the world without hate, rancor or arrogance. A rare and great man. Rest in Power and may God finally give you peace. #RIPJohnLewis pic.twitter.com/uQY48LoFzx

In his early 20s Lewis became a soaring figure of civil right campaign following his involvement in the “Big Six” including Martin Luther King during a ground-breaking march in 1963 in Washington.

He was greatly inspired by Martin Luther King in his act of activism.