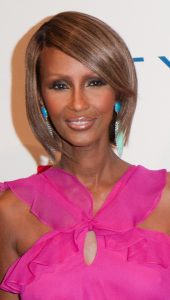 Iman was born on July 25, 1955, in Mogadishu, Somalia. Then a student at the University of Nairobi, she was discovered by photographer Peter Beard.

Since retiring from modeling, Iman has done charity work in Somalia, started a cosmetics line and was married to the rocker David Bowie who sadly passed away in 2016.

Karl Lagerfeld Has Passed Away In Paris…