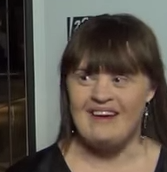 American Horror Story Actress Jamie Brewer has become the first ever model in New York Fashion Week with Down syndrome.

Jamie  was in an outfit designed by  Carrie Hammer as part of Hammer’s “Role Models Not Runway Models” show, a project that invites inspiring women to showcase Hammer’s work.

“We feature incredible influential women on the runaway. CEOs, executives, activist, actresses, anyone who is the top of the field, top of their game,” Hammer told USA TODAY Network.

“Jamie is an absolute star,” Hammer said, adding that the actress is also an activist for people with intellectual disabilities……