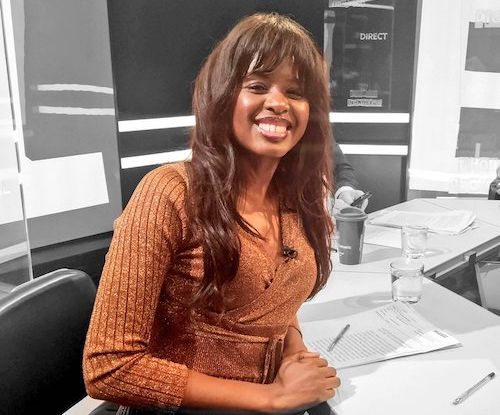 Giving back, be it in a form of money or time, is one of the most important and precious things anyone can do. We love seeing our celebrities taking time out of their busy schedules to help the needy.

June Sarpong is quite possibly one of the most recognized faces of British television. Interestingly, it is hard to recognize and pick any of her work as the stand-out, because she enriched her 20 year-long career with a wide spectrum of work and achievements on screen and behind the screen. Let’s take a brief look at some of those.

She was born in Newham, London in May 1977. Her parents are of Ghanaian descent and her brother is Sam Sarpong, the British actor and model.

She went to secondary school at Connaught School for Girls and graduated from Sir George Monoux College.

Before appearing on TV, her first media-related job was on the radio station Kiss 100 in 1999 and 2000. Then, she presented the MTV Dance Floor Chart for the UK and Ireland. She also appeared in ITV’s comedy show called Lily Savage’s Blanketly Blank in 2001.

Her breakthrough was as an interviewer on Channel 4’s daytime strand called T4. She interviewed many important political figures including Tony Blair.

She worked for Channel 4 for nine years. Another program where she worked as an interviewer was called Conspiracy Theory on TruTV, where she made controversial episodes about natural disasters such as the 2004 Tsunami.

Then, she went on to present other shows such as the game show Your Face or Mine, the urban talk-show Dirty Laundry and a dating show filmed in Mexico called Playing It Straight.

She also made appearances on BBC’s show such as Have I Got News for You and Question Time. These shows were much more serious than her previous involvements.

As a panelist, she appeared alongside other English media figures in a panel called Loose Women where she was one of the female presenters to interview female celebrities and address the issues of gender equality and women empowerment.

She was a guest panelist in 2014; however, she became a regular in 2015 and appeared in a total of 46 episodes. Currently, she is a panelist on Sky News’ weekly debate show “The Pledge”.

2016 was a year of grief for Sarpong as her brother Sam Sarpong, famous British actor and musician, committed suicide by jumping off a bridge in Pasadena, California.

Besides her busy schedule on tv, she took part in both profitable and non-profit organizations. Behind the scenes, she is running her own production company called Lipgloss Productions. Furthermore, she is currently the director on the board of a non-profit organization called the Lunchbox Fund. The organization provides daily meal and aid to the township schools of Soweto, South Africa.

More African Celebrities who give back

Another organization she is involved with is called Make Poverty History which raises awareness on poverty and works with government bodies for certain policy changes.

As an ambassador of the movement, she traveled to Ghana to give talks and to make a teaser for the campaign. She also expressed her concerns about Brexit and joined the board of the Britain Stronger in Europe campaign.

It is admirable that she even wrote two books apart from the busy schedule full of TV works and charity events. Her first book, The Power of Women, was published in 1999. The book discusses the definition of feminism, bringing clarity to the common misconceptions about it.

Her second book called Diversify was published 8 years later. In the book, she addresses issues stemming from racial discrimination and social classes, emphasizing their impact on individuals and their willpower.