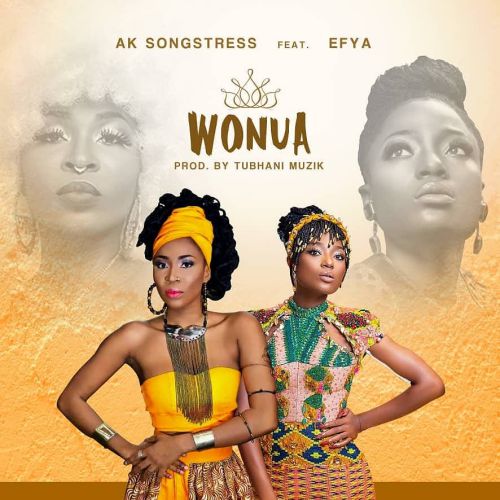 The song which is titled, “Wonua” is actually her first song in the year 2020 and her first time having a song together with a Ghanaian female artist.

It was produced by Tubhani Musik. The song, “Wonua” has a soothing rhythm and it’s full of inspirations that is really good for the soul.

Award winning Reggae and Dancehall queen, Ak, in a live interview indicated that, wonua is a song that inspires togetherness specifically in this pandemic era.

The song also reminds us that, as human beings we all need each other despite our differences. Therefore, this is the time the world should come together as one and help themselves to combat the “enemy”, Coronavirus pandemic.

Commenting on her collaboration with Efya, Ak stated that, her feature wasn’t to compete with Efya.

However, she wanted to do a song which could fit Efya’s style of singing because she respects Efya’s brand as a professional musician. She also said Efya relates to her more like a sister and that, there wasn’t any monetary charges for her feature on the single “Wonua” even though, she was supposed to charge for the feature.

According to Ak, since the virus has affected many social activities, the music video for her current song, “Wonua” would be released after the ban on social gatherings is lifted.

She’s optimistic that, her concert which she planned on having this year comes through. Ak Songstress stressed that, she’s waiting to do another project with Efya which will be different from her genre of music.

Ak Songstress who is originally known as, Akosua Kwaakye is an award-winning reggae and dancehall artist in Ghana.

The artiste realised her passion for music at a very young age but officially chose music as her profession after senior high school when she got signed under the management of Paradise Entertainment which formerly managed Ghanaian highlife music group VIP and 4×4.

Her achievements include, winning the first edition of “SUPERSTARS” reality show with her single, Holiday, the first female to bag home 2014, BASS Awards, “Discovery of the year dancehall/reggae Artist, an award category which she competed with males; Best Female Vocalist, BASS Awards (2015) among others.

The latest single, “Wonua” ft. Efya is currently available on all music streaming platforms, you can download and listen to encourage yourself whiles staying at home safe and healthy.

AK has started promoting the song with a weekly challenge on Instagram accompanied by a cash prize of GHS 200.