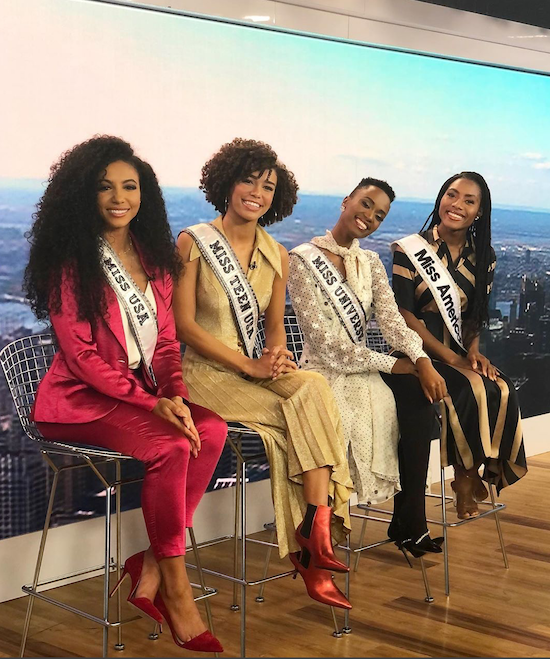 History Makers: 2019 was a historic year for the beauty queen contests.

It marks the first time that Miss World, Miss Universe, Miss America, Miss USA, and Miss Teen USA were all won by black women. Let’s get to know our winners more closely. (In no particular order)

Toni-Ann Singh who was recently crowned Miss World is from Jamaica.

Zozibini is a South African model born in September 1993 in Easstern Cape.

She moved to Cape Town with her three siblings to study public relations at Cape Peninsula University of Technology.

Her modeling career began in 2017 as she was traveling back and forth between Cape Town and East London.

She first participated in Miss South Africa 2017 but couldn’t make it to the finals.

Her second attempt in 2019 was successful, and she was crowned as a beauty pageant of Miss South Africa 2019.

This opened the gates for her to compete at Miss Universe 2019 hosted in Atlanta.

Despite the strong competition against contestants from Phillippines, Puerto Rico, and Mexico, she managed to win the title.

She became the third South African to win the title, as well as the first black woman to win since 2011 and the first woman with Afro hair.

The 1993-born model was crowned Miss America 2019. She spent her childhood in North Carolina and went to East Carolina University to study music.

she has a master’s degree in music and started composing for operas in New York.

In the meantime, she worked for ArtistCorps that provided access to educational resources for art students in rural schools.

Her early pageantry was during university years, where she competed in regional contests like Miss North Carolina.

Her win at Miss New York 2018 brought her fame and allowed her to compete in Miss America 2019.

Her talented voice, beauty, and eloquent performance earned her the Miss America 2019 title, making her the seventh New Yorker to do so.

Her mother is also a beauty pageant crowned Miss Carolina, so we can predict who she inherited her beauty from.

During her studies, she also started her fashion blog White Collar Glam, which focuses on business-styling for women.

She competed a few times for the title Miss North Carolina, but hasn’t won until 2019.

As the winner. She went on to represent North Carolina at Miss USA 2019 and became the third woman from the province to earn the title.

The 2000-born American model recently won Miss Teen USA 2019. She spent her childhood in Connecticut and studied theater at ACES Educational Center for the Arts.

Also, she was professionally trained as a hip hop and contemporary dancer. During the university years, she also volunteered at Yale New Haven Hospital and founded the NPO We Are People 1st to help the disabled.

She was then awarded to be allowed to compete in Miss Teen USA 2019 Nevada, becoming the second teen from the province after 2012’s winner Logan West.