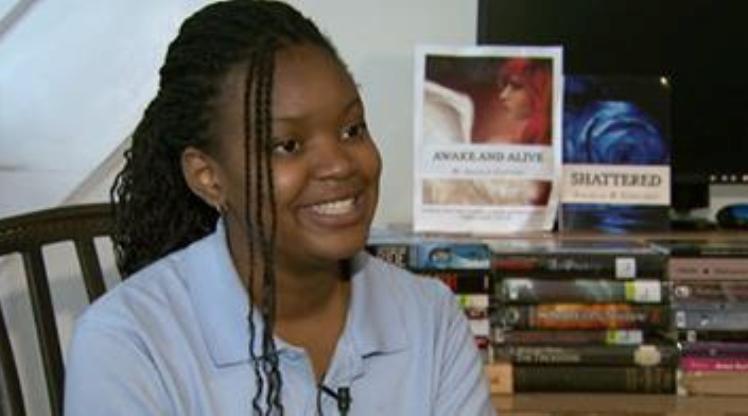 An amazing young author just had her second book published – and she is still in middle school.

As CBS 2’s Cindy Hsu reported, the mother of Angela Content, 13, of Mill Basin, Brooklyn, said she knew her ambitious daughter wanted to share her stories with the world.

But Angela’s mother was pretty shocked when it actually happened.

“And then finally one day she said: ‘Mommy, my book is going to publish. I already transmitted everything — it’s going to take 24 hours, they’re going to review it. I said, ‘OK,’” Marie Content said. “And then the next day, I heard it’s on Amazon. I’m like, ‘Oh my God!’”

Through the website CreateSpace, the determined eighth grader published two books – her sci-fi fantasy “Awake and Alive,” and her romance novel “Shattered.” They are now on sale on several sites, including Amazon and Barnes & Noble.

That is not surprising, since it takes Angela about three months to finish a book. Her latest is more than 200 pages – and she always writes by hand.

“Whatever pops in my head, I just continue writing it,” Angela said. “It just flows on paper. On the computer I just kind of get stuck.

“I wish all the parents can do the same — keep the electronic stuff away from the kids and talk to them more; hear what they have to say,” Marie content said.

And Angela had something to say to other kids.

“Continue to follow your dreams,” she said. “You’re going to feel great once you actually accomplish what you set your mind to.”

Right now, Angela is working on two more books, and she hopes to have them published by this summer.

In the long term, Angela said she will keep on writing. But she also plans tobecome a financial planner as a backup.

So far, Angela said she has made a few hundred dollars from book sales, and that money goes straight to her college fund
What an inspiration!

New Wave of African Writers With an Internationalist Bent