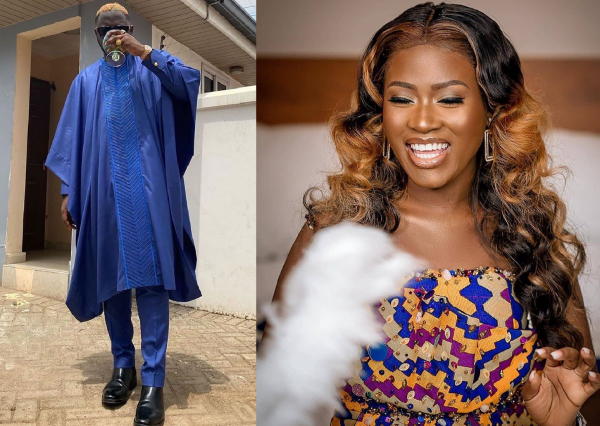 Congratulations are in order! Medikal And Fella Makafui Are Finally Getting Married!

Medikal has been active with his music career since 2014. It is revealed that, he began his singing profession whiles he was in High School.

The content of his rap during his years in the High School involved healthcare professionals thus, medical doctors, surgeons, nurses etc. As a result, the nature of his rap birthed his stage name Medical in High School.

The rapper continued effortlessly with his passion in music till he joined Chris Waddle who signed him under his record label, Arab Money Gang (AMG) in 2010.

Aside his music career, he had a side hustle in selling of phones, cars and other things.

Medikal has worked not only with Chris Waddle but with other successful artiste like Sarkodie, Bisa Kdei, Lil Wayne, Strongman, Shatta Wale, King Promise and many more to inspire people with good music.

In 2017, the artiste got the highest award nominations and has bagged home awards including, 2016 4Syte music video’s Best Discovery Video.

In addition to the above, he has also won Best African Music Artist Award in 2018 and most recent awards won at the Vodafone Ghana Music Awards 2019 awards for two categories among others.

The young successful Ghanaian rapper and hip hop artiste has been in the news since controversies surrounding his relationship with ex-girlfriend, Deborah Vanessa and allegedly dumping her for Fella Makafui.

The relationship Medikal and Fella caused a stir on social media as they post pictures and videos of their romantic affair on the internet.

Fella Makafui became known to the public through her role in popular Ghanaaian TV series, Y.O.L.O (You Only Live Once).

As Serwah, the village girl who migrated to the city with her bad English vocabularies as a bread seller, to make ends meet for herself and was taken advantage of due to her gullibility.

She has also starred in movies like, “Kanda River”, “In April”, “Chaskekele”, “Once Upon A Family” and “Away Bus”. However, before rising to fame with her hilarious role in YOLO, she was also into modelling.

Now, she owns a lot of businesses including her wine shop, clothing line, beauty salon and a delivery company. Again, she deals with a real estate company known as Rich Hills Property.

Medikal disclosed to the public during his performance at the just ended pent hall week, his marriage ceremony with Fella Makafui which happened today march 07, 2020.

Initially, fans raised concerns about it being a fake news because of the shenanigans the two have been playing of late on social media.

Surprisingly, the celebrity couple have taken their relationship which people thought was at the verge of collapsing due to the circumstances surrounding it, by tying the knot today.