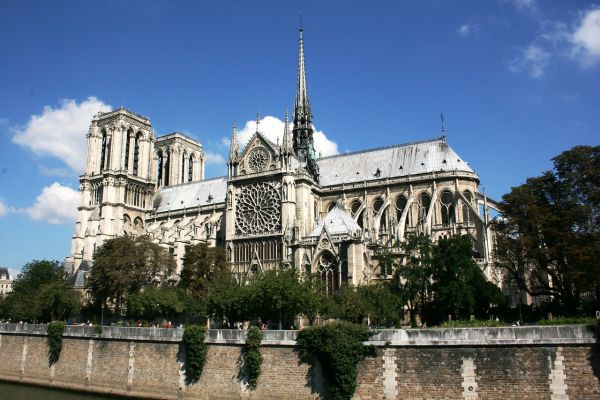 Very Sad day for Catholics all around the world and the people of France.

The most iconic landmarks in the Paris, Notre Dame Cathedral is engulfed in flames. Very horrific and heart aching to watch the church go in flames.

The iconic spire, roof and much of the interior of Notre Dame Cathedral were destroyed in a shocking fire that spread very quickly within a short period.

The Cathedral was construct around 1163 and took 200 years to complete and was finally opened in 1345 (dedicated to Mary Jesus’s mother)…  The 850 year-old Cathedral draws about 13 million visitors a year.

President Emmanuel Macron has promised to rebuild the Cathedral

“We will rebuild the cathedral together,” he added that “The worst has been avoided, but the battle isn’t fully won yet,”

They had more than 400 fire fighters on site this iconic landscape to put the blaze off. Considering that Easter is just few days away is it very sad and is going to be very difficult for most Catholics.

The 850 year-old Cathedral is one of the oldest in the world and has survived 2 world wars.  It’s a building filled with history, memories, is known as the place where Napoléon Bonaparte (he led the French revolution) had his coronation as emperor in Notre-Dame in 1804.

It has unique architecture, artefacts and more.

This evening, the French President, Emmanuel Macron announced that, most of the artefacts has been saved from the architectural feet.

Saved artefacts includes, priceless paintings, the crown of thorns worn by Jesus as well as part of his cross.  The Notre-Dame organ has about 8000 pipes.

“The Crown of Thorns, the tunic of Saint Louis and several other major works are now in a safe place,” ~Mayor Anne Hidalgo

We all stand with the people of Paris and all Catholic churches during this difficult time. Nos cœurs sont avec vous.

"The Holy See has seen with shock and sadness the news of the terrible fire that has devastated the Cathedral of #NotreDame, symbol of Christianity in France and in the world." @AGisotti pic.twitter.com/cRjUxkxRwa

The world watched in horror today as a massive fire ripped through Notre Dame Cathedral in Paris. While the damage is extensive, the structure is safe, according to Paris police pic.twitter.com/8ZvxlZsFDd

Powerful footage from Paris. Amidst the flames, ash, and rubble, the altar and cross clearly remain intact at Notre-Dame Cathedral. Truly a symbol of hope, purpose, and love during Holy Week as we prepare to celebrate Easter around the world. pic.twitter.com/JHCOh2u7qU