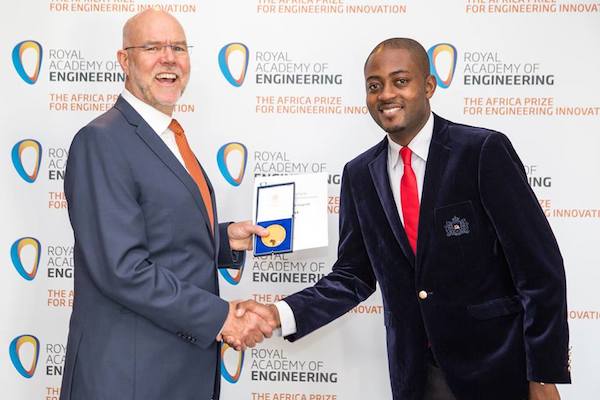 Cameroonian Engineer behind the Cardiopad Arthur Zang, wins African Engineering Award! Zang is the inventor of the Cardiopad, a touch screen medical tablet that enables heart examinations such as the electrocardiogram (ECG) to be performed at remote, rural locations while the results of the test are transferred wirelessly to specialists who can interpret them….

Is good to know that all his effort has been rewarded.. Arthur took to his Facebook with the photos below and caption ”After a very long competition attended by 900 candidates among the best African engineers and researchers. I am more than honored to receive this prestigious award, and the priceless reward of the most innovative African engineer from Royal Academy of Engineering of London….Thank you all for your support, long live the Africa Engineering.”…

The device spares African patients living in remote areas the trouble of having to travel to urban centers to seek medical examinations. Prior to Zang’s invention, patients suffering heart ailments had to travel long distances to the urban centers in order for them to undergo examination. Even if they could, the sheer numbers of the patients and the fact that the heart surgeons are only a handful meant that patients had to make appointments months prior. In some instances, some patients died before their scheduled date of appointment with the doctors.

Arthur Zang Founder and CEO of Himore Medical won the Rolex Awards for Enterprise 2014 in the Category of Sciences And Health….

Once again huge congrats ! such an inspiration! Félicitations !

Scandal: Do you think Quinton will change his mind about Thembeka…

Arthur Zang A Cameroonian Engineer behind the Cardiopad: A Revolutionary Touchscreen Medical Tablet