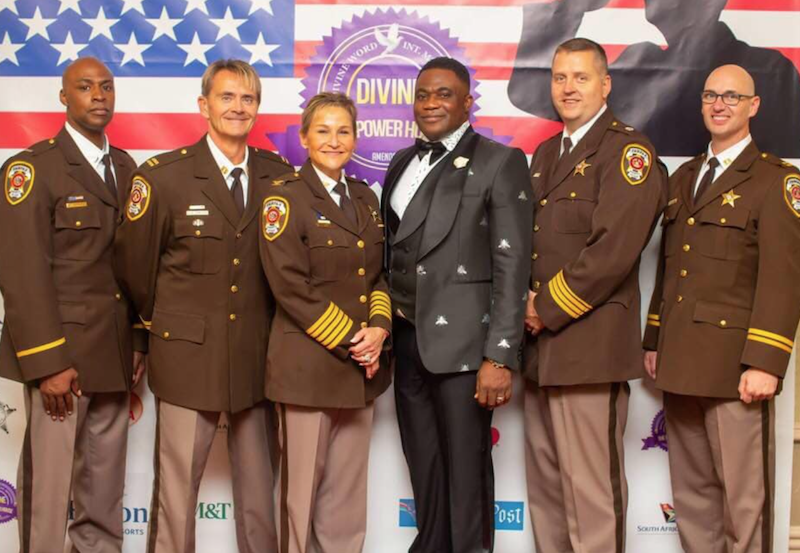 “This day has especially been chosen by Divine Word International Ministries (DWIM) and the Faith community that is here… [because] we see the great work that the police service do in our community. The sacrifices they make is why we find safety and peace in the community…” With these words, Bishop Dr. Kofi Adonteng Boateng officially set the ball rolling as host of the maiden edition of the ‘Faithful Servants Awards‘ (FSA).

Standing next to the Bishop as he spoke on that weekend night of October 27, 2018, as Emcee for the FSA in the person of Captain Michael F. Grinnan, Commander of Franconia District Police Station of the Fairfax County Police Department, in Virginia (VA), United States (US). The event held at the Mark Center Hilton hotel located at 5000 Seminary Road in Alexandria, VA, honored about two dozen officers of respective VA Police Departments.

Captain Grinnan also revealed in his address that the FSA which sought to honor both officers and civilian employers of the VA State Police, Franconia Police Department (PD), and Fairfax County PD for their commendable, exemplary and dedicated service, will go nationwide in the near future according to plans being made by DWIM.

Personnel from the Fairfax County Office of the Sheriff were honored too. The Valor Award for that department respectively went to MDS Jesse Hernandez and David Anderson. Kyleen Dodrill and Kelli Schollard-Sincock were the Sheriff’s Department Civilian Employee of the Year and Volunteer of the Year award winners respectively. Carlos Ambrosini was the Citizen Award recipient from the County Sheriff’s Office.

This banquet-awards organized by DWIM in conjunction with the Faith Community to honor the Police of VA also gave the public a chance interaction with the police who on the other hand felt the appreciation of the community for their work. It was attended by over a 100 individuals and officers, community leaders, as well as sympathizers of DWIM, some of who had traveled from New York, Georgia, Texas and other parts of the US as well as Canada and Ghana.

A member of the faith community who spoke about the event said, “this event will help to reduce the negative tensions that exist between the Police and immigrant community, together we can change perceptions and enhance diversity. This is what America has always been about anyway. I am excited to be here for the 2019 edition already.”

Bishop Boateng on behalf of the FSA also gave Captain Grinnan a special award for his years of selfless service, professionalism, courage, leadership, and contributions towards the successful holding of the awards. Other senior officers like James L. Reid received special awards too.

For more information about this maiden event, and how to be part of the 2019 edition contact DWIM at www.divinewordintl.org and the Fairfax County PD at www.fairfaxcounty.gov/police.