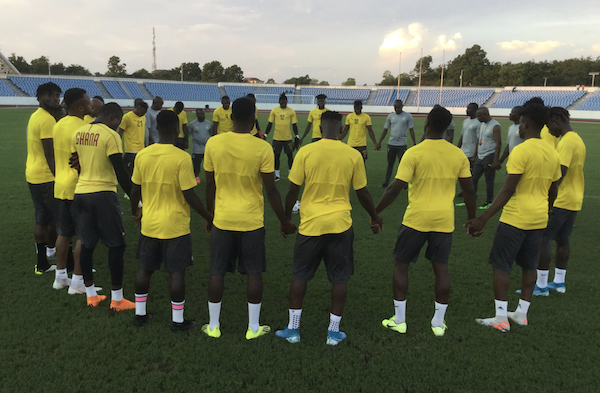 The Ghanaian Black Meteors will be landing in Egypt to begin their quest to qualify for the 2020 Olympics.

The team were in Cape Coast for their training and preparation for their next game on Monday against tournament hosts Egypt.

It is quite an exciting time for Ghana as this is the first time the country is participating in the Afcon qualifier since its inception in 2011.

The team is running under the theme #BRINGBACKTHELOVE which was introduced by the newly elected GFA President Kurt Okraku.

He was inducted as the new President on the 25th of October 2019 and players are hopeful his manifesto promises will see the light of day.

Kurt is a former sports journalist and executive of Dreams FC he has also served on various executive committees of the Ghana football Association as well as the national team.

Kurt introduced the theme bring back the love to reignite the nation’s love and support for football.

President Kurt Okraku is not alone in his quest to bring back the love of football, he is being assisted by the legendary Ibrahim Tanko who is currently serving as the Head Coach for the Black Stars.

He is a retired Ghanaian-German football player, he played for 15 years before he was forced to retire because of injuries.

Ibrahim Tanko is positive that the black stars will be able to qualify for the 2020 Olympic games.

Head coach Ibrahim Tanko and his changes will open their campaign against Cameroon in Group A before engaging hosts Egypt and Mali on the 11 and 14 November respectively.

“Its been sixteen years since we qualified to the Olympics and you have three to four games away from a ticket to the Olympics, We believe you can do it so believe in yourselves and do it for Ghana.”

Ghana is fully behind the nation and the president and we wish them success in their upcoming games.

The Black Stars are on their way to the Cape Coast Stadium for their final training for tomorrow’s Afcon 2021 qualifier with ⁦@BafanaBafana⁩ and drive through the University of Cape Coast campus got the students charged. pic.twitter.com/UMpq3UVvHp