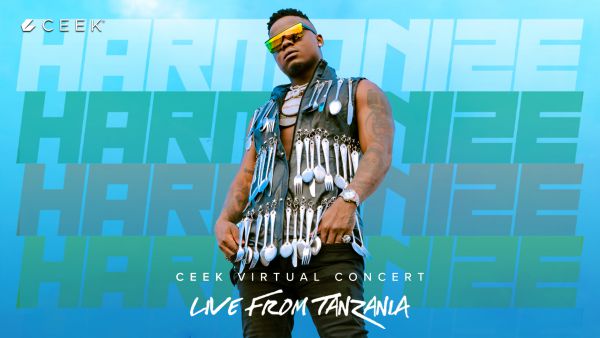 From the shores and serene atmosphere of Zanzibar in Tanzania, iconic Bongo Flavor artiste, Harmonize served fans across the world with his virtual concert on ceek.com

With a unique introduction of him cruising on the Zanzibar ocean with a boat whiles pondering over the background song ‘Maliaka,’

He began the live concert with his band along the ocean where he performed on a floral and wooden decorated stage. Recounting the story of his life.

Harmonize got emotional as he showed remorse for hiding his daughter for over a year and decided to sing one of his unreleased  song “Sorry” to apologize to his adorable daughter, as well as making the world and her daughter know how much he loves her.

He also used the song ‘Sorry’ to confess and apologise to his ex-wife Sarah Michelotti for what let to their divorce.

‘I’m sorry is the only Word I can use to the one of Beautiful Woman 👩 Alienipatia Miaka (4) Ya maisha Yake Nami Nikampatia (4) Yangu Tulipitia Mengi Ila itoshe Kusema Nilizingua Sanaa ..!!

Harmonize used his virtual concert to also ask for forgiveness from his father who wanted him to be a footballer.

“Never Give Up, is also very personal to Harmonize, because even though he was struggling he never gave up.

He also shared  advice from his mom regarding people and trust.

The people you comes across in life will not always be happy about your success, therefore, we shouldn’t put our trust in people rather, keep our heads up and never give up on the path to fulfilling one’s dream.’

This was followed by the love song, “Bedroom” then “UNO”

The atmosphere was then charged with his song “Pain” where Harmonize and the dancing crew exhibited great performance. The second part saw Harmonize mounted on the main stage and performed his hit songs including, “wife”, “Inanimaliza,” and “Malaika,” remarkably along with his backing vocalists and instrumentalists.

He climaxed the concert with a touching performance of the song “Malaika” which he took inspiration from during his underground stage of striving to become a mainstream artist.

Harmonize narrated how he had been looked down upon and even been dismissed as someone who can never make it in the entertainment industry when he went for a talent show audition in Tanzania some years back.

“Before I became Harmonize…They said I can’t become a superstar… but I was focused, worked hard and believed in God. So, don’t’ give up in following your dreams, just believe God and work hard”.

He then admonished the young talents who look up to him and his music lovers to always believe and trust in God whiles they’re trying to make it in life because with God, everything is possible.

It was indeed a captivating experience with the East African legend!

Kudos to both Teams , Team Ceek and Konde Tanzania for such a unique concert for Kondeboy fans and music lovers worldwide,  a moment of elation through good music and undisputed effects and stage craft displayed at the scene of the concert from Zanzibar, Tanzania.

If you missed Harmonize Virtual Concert, you can still watch it by visiting www.ceek.com