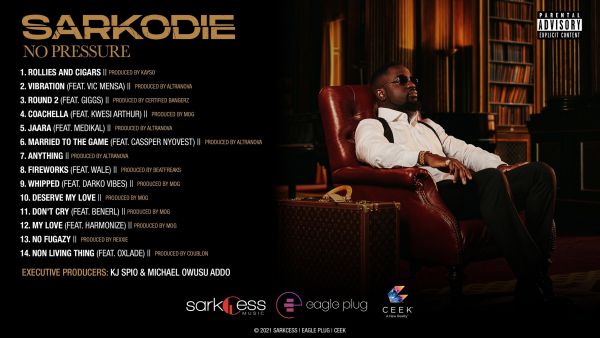 Sarkodie No Pressure OUT NOW!

Finally, the countdown for the much awaited “No Pressure” album from Ghana’s most-decorated and internationally recognised rapper Sarkodie is over. Sarkodie’s No Pressure is out today Friday July, 30 2021.

The ace rapper will unleash some exclusives of  No Pressure on the virtual streaming platform, Ceek.

As it was disclosed in Sarkodie’s initial announcement, the heavyweight album is a project with production credit given the rapper himself and KJS Spio.

The album, comprising of 16 tracks featuring top artistes in Ghana and across the African continent.

The album also features multiple record producers whom without doubt, will spice up the rhythm with mind-blowing mixes and bars.

Already, the rapper has dished out two singles, “No Fugazy” and “Coachella” featuring Ghanaian ground up rapper, Kwesi Arthur.

Get all the No ‘Fugazy’ Gist Here

The songs have received massive airplay and garnered great views from music lovers and fans around the world.

Below is the 16 tracklist from the album, No Pressure

The official proposed date for Sarkodie’s No Pressure album was on July 07, but on the due date, the most influential rapper released a statement on his official Instagram page, proposing a new the date, July 30, 2021.

The rapper’s reasons in his statement was that he needed more time work on few things in order to produce excellent work suitable for his fans.

What’s your favourite  song on the No Pressure Album and why? Drop your comments below