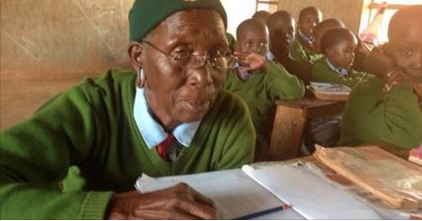 Priscilla Sitienei, a Keyan woman aged 90 years goes to class with six of her great-great-grandchildren. It is believed that, she is the oldest primary school pupil in the world. Priscilla in class four sits at the front and listens attentively during lessons. She joined Leaders Vision Preparatory School 5 years ago, and has served as a midwife in her village of Ndalat in the Rift Valley for 65 years. Amazingly, she has helped some of her own classmates aged between 10 and 14 to deliver.

Affectionately known as Gogo, meaning grandmother in the local Kalenjin language. She says at 90, she is finally learning to read and write.. an opportunity she never had as a child. Priscilla said her reason to return to school is to be able to read the Bible and also inspire children to get an education.

According to the headmaster David Kinyanjui believes “Gogo” is an example to the rest of her class and we are very proud of her. She is loved by every pupil as she tells stories to her classmates under trees near playing fields to make sure her knowledge of local customs are passed on. Some pupils also love her because she keeps them in order, and shuts them up when they make noise.

Her other reason for wanting to have education is to pass on her midwifery skills and write down her knowledge on herbal medicine to the next generation.

” I want to say to the children of today,especially girls, that education will be your wealth, don’t look back and run to your Father” She says.

Priscilla “Gogo” Sitienei own’s lesson testifies that “It is never too late”.

It’s Never Too Late To Follow Your Dreams! What’s your dream for 2015? Turn Your Dreams Into Reality!  It’s your year to achieve new results! #Africa