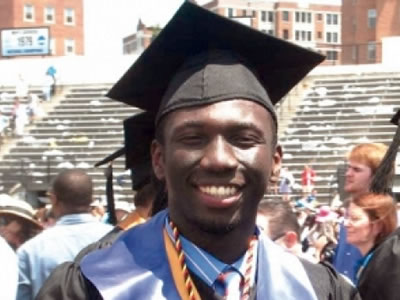 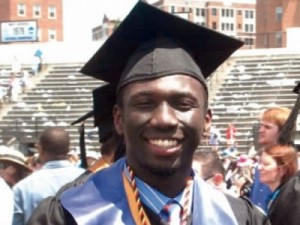 22 year-old Emmanuel Ohuabunwa has emerged as the best graduating student in the Johns Hopkins University, USA with a grade point of 3.98 out of 4.0 in Neurosciences.

Ohuabunwa who hails from Abia State, has been able to make the nation proud and with his efforts has won himself a scholarship to Yale University to get a degree in Medicine.

He has also become a member of Phi Beta Kappa Society, a prestigious honor group that features membership of 17 US Presidents, 37 US Supreme Court Justices, and 136 Nobel Prize winners.

The Phi Beta Kappa Society is an academic honour society. Its mission is to “celebrate and advocate excellence in the liberal arts and sciences” and induct “the most outstanding students of arts and sciences at America’s leading colleges and universities.”

Speaking about how he moved to the US, Ohuabunwa said “my parents moved the whole family when I was 13 years old. I was about to begin SS1 at Air Force, Ibadan. When I got to the US, I was enrolled with my age mates, which meant at 13, I was in middle school.

“I went to Fondren Middle School, which was in the middle of the ghetto. That was one of the darkest years for me because I encountered a lot of peer pressure.

Some of the students, ignorant about Africa, bullied me and called me names such as ‘African booty scratcher’ because to them, Africans were dirty and scratched their butts all the time.

“Some asked me if I lived in mud huts and ate faeces for breakfast.

“I remember one day, when I was walking to the school bus, a boy came from behind and punched me in the face, called me an African and walked away. It took everything in me not to retaliate. I knew that God had put me in the U.S for a purpose and it did not involve fighting or selling drugs or doing the wrong things.

“My experience during that year gave me a thick skin. I learned to stand for what I thought was right even when the opposition seemed insurmountable. I also learned to look at the positive in all situations. Even though these kids were bullying me, I was still gaining an opportunity to school in America and nothing would stop me from making the best of this opportunity.

“I knew I wanted to go to the best school in the US. I had heard that Johns Hopkins Hospital had been ranked the number one hospital in the US for the past 21 years and I wanted to be in that environment.’’

Worried that his parents might not be able to sponsor him to the university, Ohuabunwa purposed to work very hard. He did and when the result of the PSAT came, he performed so well that he won the National Achievement Scholar.

By virtue of this award, he received certificates of recognition from various organisations including senators from the Congress of both Texas and the US. He also received scholarship from the University of Houston; Rice University, Texas A&M Honors College and many more.

He had also won the Principal’s Award during the annual awards ceremony at DeBakey High School.

“I studied Neuroscience, because I was fascinated with the brain, its control of our behaviours and how various diseases such as Alzheimer’s disease, lead to a decline in its activity. I also minored in Psychology because I wanted to understand disorders in the psyche. What causes bipolar disorders or schizophrenia.

I did not just want to label them as crazy but to understand what causes these conditions and how we can treat them,’’ he explained.

But what does he consider to be the missing links in the education sector of Nigeria when compared with that on offer in US, Ohuabunwa said unpredictable academic calendar, corruption, examination malpractice and inadequate funding were some of the problems confronting his home country’s university sector. These, he said, were absent in the US.