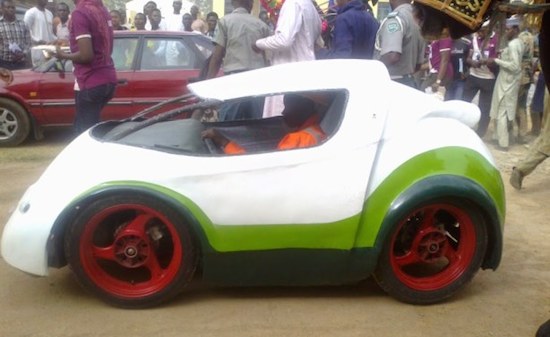 The Ahmadu Bello University (ABU) at the weekend unveiled a car that was manufactured by the institution’s Department of Mechanical Engineering.

While unveiling the car to journalists, the Head of Department, Dr. Mohammed Dauda, said the car is environment friendly.

Dr. Dauda, who doubles as the Dean, Faculty of Engineering, also said that the car would participate in this year’s ‘Shell Eco Marathon Competition’.

“In addition to federal government’s automotive policy, I must say that the reason we started this (manufacturing of the car) came from Shell Petroleum Development Company of Nigeria Limited. They invited ABU to participate in what they call Shell Eco Marathon

Competition. The car should be one that consumes little fuel but goes long distances. This competition is held in America, Europe and Asia and we are participating in the European one in Netherlands in May this year. All materials used for this car were sourced locally,” Dr. Dauda said.

He added: “Though, there are things that we did not fabricate ourselves, you will be surprised that some of the components like the electrical, we just looked at an old computer system and then adopted some of the components that were useful to us. So, this is one example of what we did, which is recycling, otherwise, I will say 100 per cent of the things we used were produced here in Zaria”.