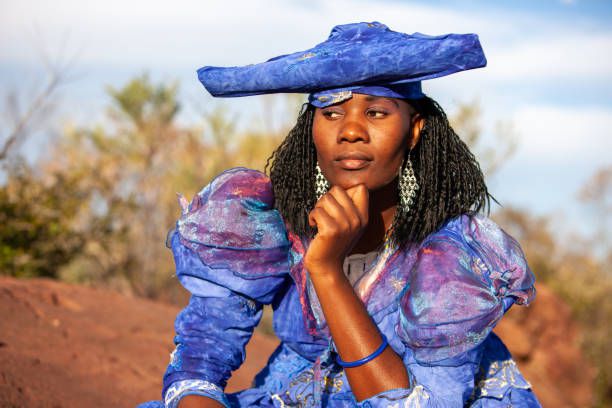 One ethnic group that struggled a lot during the colonial period is the Herero inhabiting mainly Namibia. During the Bantu movement, they migrated to today’s Namibia where they lived through herding and agriculture.

The 18th and 19th centuries saw them battling with Nama groups of South Africa and German colonialists. Sadly, most Herero people were wiped out during these times.

Now, as an attribution their ancestors being slaughtered, the surviving women of Herero are dressing in a distinctive style that resembles the traditional costumes.

The question that comes to mind is; what was the chain of events that led to the Herero genocide. When German colonists started settling and invading the land that belonged to Herero people, conflicts started to rise.

The German colony was quickly established as German South West Africa. Soon after this, Herero people started to complain due to the discrimination and the lack of access to resources.

The final straw came with the decision of relocating Herero villagers, which resulted in a large-scale riot and the ultimate massacre of many Herero people.

It was estimated that a total of 65000 people were slaughtered in the ensuing massacre. The ones who survived were either kept in concentration camps of forced to work as slaves.

Interestingly enough, this tragedy created an influenced and fused culture and lifestyle among the people of Herero. For instance, Herero warriors would steal the uniforms of German soldiers they killed. They believed that this would transfer the soldiers’ power into them.

The fashion style of women was affected much more drastically. They adopted long and colorful gowns that were originally worn by German missionaries.

The dresses are generally known as ohorokova. The distinct feature of ohorokova is the horizontal horned headdress called the otjikaiva.

This is a homage paid to the ancestors who herded cows. Other common features of these dresses include high necks, long sleeves, colorful patchwork made of fabric and crinoline-type skirts.

these features, especially the headscarf are a way for the women to hold on to their heritage. Many Herero women refer to these dresses as “the only thing left for them after colonialism took everything”

Among women, the dress is also seen as the transition into womanhood. When puberty begins, the young girls are provided with these dresses and taught how to wear them.

Today, there are continuous attempts to revive their tradition by evolving this particular dress style.

Windhoek has become the center of Herero fashion with many fashion designers – both local and international – working on designing modernized versions of ohorokova.

While some designers prefer to stick to the traditional design of the dresses, others are bringing a novel approach by westernizing and using bright and fancy material.

McBright Kavari is the most reputable fashion designer in that regard, winning the Best Herero Dress competition held in Windhoek three times in a row.

However, his modification of the outfit was met with mixed reviews, with some people perceiving it as an insult to the culture.