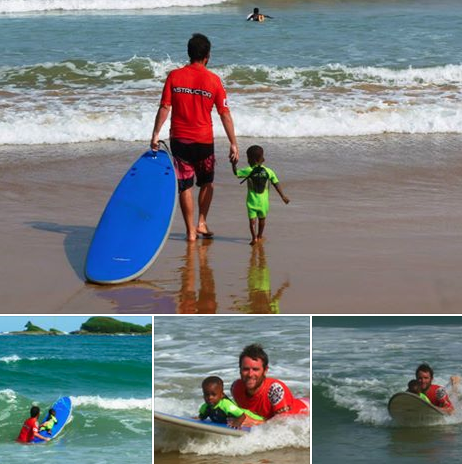 James Edward Alexander was perhaps the first to document Surfing in Ghana.

James Edward Alexander was anchored off the island of Accra , off the Cape Coast not too far from the “yellow sands” of what used to be called Guinea.

On November 16, 1835 , while describing native island life, Alexander noted that, “from the beach, meanwhile, might be seen boys swimming into the sea, with light boards under their stomachs.

They waited for a surf; and then came rolling in like a cloud on the top of it. But I was told that sharks occasionally dart in behind the rocks, and ‘yam’ them.”

In 2011, for the first time ever 3 young surfers from Busua Beach Ghana, Clement Slater 20, Peter Ansah 20, and Emmanuel Ansah 17 went to South Africa to participate in the trip of their lifetimes.

That was the first time that any surfer from West Africa had competed in an event of this scale in South Africa.  More and more Ghanaians are taking a liking to Surfing now…

They have 2 locations, The KangarooPouch BeachResort, Busua beach and Big Millys, Kokrobite.

Mr Brights Surf School alongside The West African Surf Association (WASA) is associated with the surfers of Ghana and Western Africa.

They aim to make the next few decades of surfing in Ghana much better documented than ever before!..

**There might be other Surfing schools in Ghana. We however have 2 or 3 people who have used Mr Brights Surf School before and told us about the nice time they had.