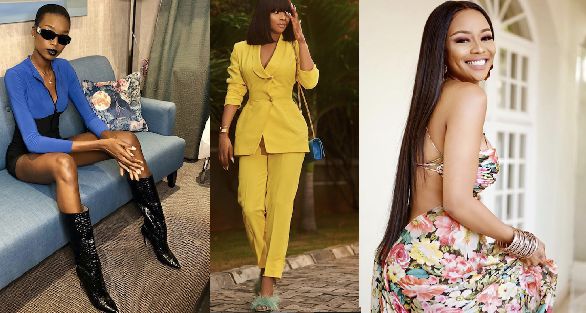 Africa is known for being a vibrant and eccentric continent, rich in culture and full of diversity. While Africa is home to magnificent nature and animals it has also been blessed with young change makers who are inspiring the youth to pursue their dreams.

These celebrities have redefined what success means for the next generation and all while making a change in their societies, we have followed their journeys from the beginning, and we are excited to see what’s in store for them.

Here’s a list of 10 Inspiring and Exciting African Celebrities to watch in 2019 in no particular order:

This young South African first burst onto our screens when she entered MTV’s VJ Search in 2012, however she didn’t win the contest and it turned out to be a blessing in disguise.

Nomzamo Mbatha landed her first role as an actress in the hit TV soapy ISIBAYA then she went on to Star in hit Movie Tell Me Sweet Something.

She was born in a small township (KwaMashu) in Durban South Africa and had a challenging childhood as she lost her Father at a young age.

The story of Nomzamo Mbatha is inspiring as it is one of a young girl overcoming adversity to become successful. She has gone on to represent Brands Like Audi, Neutrogena, Puma and was recently named UNHCR Goodwill Ambassador.

Angolan-born Model made history as the first woman of colour to walk the runway with her Afro in 2013 and this has inspired other African models to confidently wear their natural hair on the runway.

Maria was born in the Angolan Civil War and lost her parents at the age of 11. To make a living, she entered the “Elite Model Look Angola” contest where she was scouted by an international agent and this launched her career.

She has walked the runway for Tom Ford, Balmain and has become the Global Ambassador for L’Oréal.

An American Actress of Zimbabwean descent who was born in Iowa to Parents who later moved back to Zimbabwe when she was five. She is best known for her roles in the hit show Walking Dead and as a fierce warrior in Black Panther.

Danai started acting when she attended a children’s performing arts workshop at 13 and has never looked back.

She moved back to the States to pursue a Bachelor of Arts degree where she also uncovered her passion for writing.

Gurira said she began writing plays to tell stories that convey ideas about strong women she identifies with.

She has received numerous awards for her plays including the NAACP Theatre award for best playwright. We can’t wait to see what she gets up to in 2019.

King SMADE is one of the African Celebrities putting Africa on the map through Music/Events/Festivals and more.

He’s the only event organiser in the U.K who has been able to bring all the top African Stars to Europe for sold out concerts, the likes of Davido, Diamond, Platniumz, Tiwa Savage and more.

Just like the saying no hard work goes unnoticed, King SMADE was at the House of Commons UK to pick up an award for his contributions and promotion of African Culture & Music.

”such as musSecond time at the House of The Lords this year being a recipient of another award. Thank You #EuroKnowledge #DrAlexItkin.

Thanks to everyone promoting the African Culture & Music. Special Thanks to my Team of soldiers at #TeamSMADE & the amazing Talents & Superstars making us proud.”

This radio personality has successfully built a loyal audience in Nigeria through her radio show The Morning Drive on 93.7 FM. She made her major debut when she appeared on the morning drive which led to more television opportunities.

Toke lost her parents at the tender age of 8 years which she talks about in her book “On Becoming”. Regardless of her struggles, she is one of the most sought-after Nigerian media personalities and that’s why she is the one to watch.

The “Born a Crime” author is known for turning life’s struggles into humorous comedy. Born into the Apartheid era to a black Xhosa Mother and a white Swiss-German Father where interracial relationships were illegal.

Trevor’s parents managed to keep their relationship and their child a secret.

Some of his experiences growing up would become the subject of Noah’s comedic work.

Having appeared on a popular soap when he was 18, Noah began to host a show Noah’s Ark on a popular radio station which he later dropped to pursue comedy.

His career in comedy blossomed, and in 2009, he hosted one man show Daywalker which led him to touring the United States.

International Television shows soon caught up with Trevor Noah and in 2015 he was named the host of the Daily show succeeding Jon Stewart.

Trevor Noah’s journey is one of overcoming life situations regardless of your background.

A fashion model who is known for being one of the first dark skinned models to appear on fashion covers in the 90s.

She was born into the South Sudanese Dinka Tribe in 1977 and was discovered at an outdoor market in Crystal Place at the age of eighteen.

She has been in fashion and advertising campaigns for big brands which include Vogue, Clinique, Victoria Secret just to mention a few. Life wasn’t always easy for her.

She had a rough upbringing as her life was turned upside down by the outbreak of the civil war in 1982 which destroyed their homes.

Wek lost her father and was separated from her family for over four years. She has since gone back home to Sudan to establish a foundation.

She also  launched and expanded education, healthcare and agriculture projects where she is impacting the lives of over 700,000 individuals.

A South African fashion photographer with a growing Global footprint. His career blossomed when he was named ELLE Magazine’s first ever style reporter in 2012.

Born and raised in Kimberly, this vibrant Artiste has always had an eye for fashion and story telling.

He has and has had various mediums to portray his stories including big Magazines like Elle and Glamour.

She is one of the Forbes 30 under 30 2018 recipients and was recognized as a writer and actress. Coutinho was born in Kampala, Uganda and has had a passion for writing since she was 17.

She writes shows that tackle issues to do with gender equality and in 2012 she wrote Kawuna..You’re It addressing inequality with regard to HIV/AIDS.

Recently, she was selected as one of Kevin Hart’s Laugh Out Loud Filmmaking Fellowship for her script immigration in Africa.

She is one young woman determined to change the narrative for women in Africa and the world.

She is an international filmmaker and actress who made her debut Award Winning performance in 12 years a slave as Patsey. Born in Mexico to Kenyan Parents.

Lupita started acting as a teenager in Kenya and went on to work behind the scenes of the film the constant gardener.

Went on to produce a documentary In My Genes which followed stories of several Kenyans living with Albinism.

Lupita is a symbol of strength and confidence to a lot of young women who are ashamed of their dark skin…but she has come to own her beautiful skin.

She starred as a female lead in Block Buster Movie Black Panther and is one African woman making waves in Hollywood.

“Queen B,” as she is popularly known is a South African TV presenter, entrepreneur, radio personality and philanthropist.

She was born in Mahikeng and got her first breakthrough at the age of 15 on a television show.

She then went to school to pursue a degree in Marketing but was unable to finish because of financial difficulties but she was not deterred.

Her first media job came with her show Live, aired in 2007 which quickly gained popularity and became the most watched show in South Africa.

She went on to host a show called the B-Hive after being rejected for two years. In 2017, she launched the Bonang Matheba Bursary which helps young girls from under privileged backgrounds to access college education.

She also launched her reality show Being Bonang in 2017 and it has been renewed for Season 3, as well as a documentary, Public Figure aired at Cannes Film Festival, which seeks to educate the youth on the use of social media.

We have witnessed her journey from the very beginning, and we are sexcited to see what 2019 brings for her…