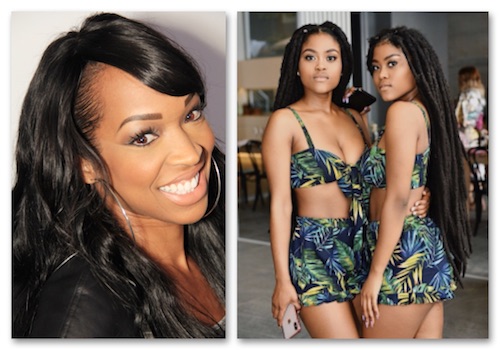 Celebrity twins have always been the center of attention for several reasons.

Not only do people find twins fascinating  but they also like to compare their career paths and achievements.

Here are some black celebrity twins who are beautiful, talented and successful that you should know about. (In no particular order)

Both celebrities are quite successful in the film industry but on the opposite sides of the curtain.

Sidra Smith is a director and producer known for Daredevil and All Political Prisoners. On the other hand, Tasha Smith is a successful actress known for her roles in “Couples Retreat”, and “Why Did I Get Married”

These beautiful twins gained instant fame by appearing on Keeping Up With the Kardashians as Khloe’s best friends.

They have done modeling as we as acting in various movies such as the superhero comedy Sky High. Currently, they are busy with their cosmetic brand Becca.

The New York-based African-descendant Quann Twins have made quite a revolutionary entry into the fashion industry in New York.

The twins who initiated a lifestyle blog called “Urban Bush Babes” quickly attracted attention with their hairstyle and their unique Afro-cosmopolitan styling.

This intrigued many brands like Diesel, Gap, and And Other Stories, who approached them for campaigns. They also gave interviews for the New York Times, Vogue, and Refinery 29.

The Fabulous Anelisa and Asanele Sodekwa, 21, are identical twins that are using social media to share makeup and hairstyle tips as well as parts of their lives.

They stand out for pulling each other’s leg and their identical looks & voices, especially when they speak at the same time.

The Mbere twins are most famous for their hip hop DJ duo called the Major League.

Although the South African twins were born in Massachusetts, USA, they moved to Johannesburg at a young age.

Their father was a South African ambassador in Rwanda. Since 2013, they have been running Major League Gardens, which is one of the biggest hip hop festivals of South Africa.

The gorgeous South African Mbombo sisters are among the most popular TV personalities.

The Portuguese-African twins are known for their projects in reality TV, modeling, and fashion industry. Blue first appeared on TV with the modeling show “Diamond in The Rough”, and Big Brother Mzansi.

This opened the doors to a successful modeling career, where she worked with brands such as Himeros and Dark & Lovely.

She is also running her clothing line with twin sister Brown. Brown is also quite popular for her relationship with DJ Prince Kaybee.

The famous Kenyan twins are two of the most well-known figures in Kenya’s fashion industry. Lisa is a fashion and lifestyle Youtuber, who often causes debates because of her sexist statements.

Anita Gaitho on the other hand works as a fashion designer at her clothing line Siri Studio.

The identical Nigerian twins are musicians who were active in the Nigerian Afropop scene between the 60s and the 80s.

They released in four albums in only years, quickly becoming famous all over Africa. Their fusion of numerous genres like soul, reggae, and acid funk, was highly acclaimed for its originality.