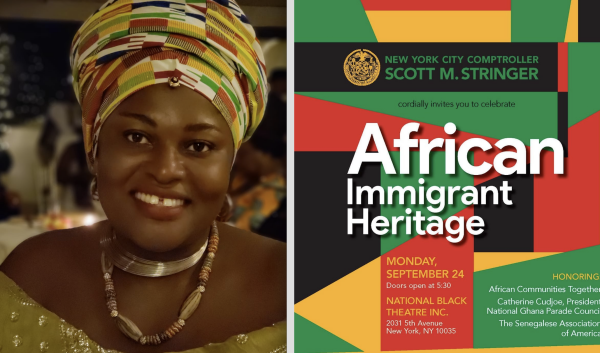 “This is such an unexpected honor for me, I am just happily working within the African Diaspora community here in New York City (NYC) over the past decade as an immigrant from Ghana to the United States (US). So for the city to recognize me in such a huge way is indeed humbling,” said Catherine Cudjoe about being among individuals and organizations to be recognized by the NYC Comptroller this September.

Besides Catherine Cudjoe, organizations like African Communities Together (ACT) and Senegalese Association of America (SAA), will be among honorees of the 2018 ‘African Immigrant Heritage Month‘. This event is dedicated to recognizing contributions of African immigrants and Americans of African heritage.

The ACT is an immigrant organization fighting for civil rights, opportunity, and a better life for their families in Africa and in the US, while the SAA, is the largest Senegalese association in the diaspora focussed on helping immigrants navigate the complexities of life in the US.

Catherine said to TheAfricanDream.net in an interview from here NYC-base that “this recognition is not all about just me, it mainly also is about the National Ghana Parade Council (NGPC) which I joined in 2008 when it was founded as a volunteer of which I am now President of.”

She continued saying: “The hard work we do here that resonate beyond the walls of New York which colorfully display the significant role, and strength of Africans in this beautiful city we all share is what has resulted to this.”

Mr. Stringer has been Comptroller of NYC since 2014 with the responsibility of auditing the performance and finances of city agencies and making recommendations on proposed contracts. Among other things, he also reports on the state of the economy of NYC and is investment advisor to the NYC pension funds.

As Mr. Stringer was taking office as Comptroller in 2014, Catherine had just graduated from Lehman College that year with a Bachelor of Science degree in Therapeutic Recreation and was also named President of NGPC same year.

Click here to read stories of other African immigrants in the US.

She said to TheAfricanDream.net that “I just wanted to help people, I received a lot of blessings and help from others and so giving back was my way of thanking God for his mercies and blessings upon my life, am just amazed at how all this has come full circle.”

Now resident in Bronx NY, Catherine is currently enrolled at the Devry University where she is pursuing an MBA in Hospitality. Catherine is also Founder of Keymama Foundation.

She is the eldest of 3 siblings; 2 brothers and a sister. Catherine immigrated to the US in 1997 where she deeply champions causes within respective African communities and is always ready to share and display the African culture and how it adds flavor to global diversity.

Starting at 5:30PM on Monday, September 24, 2018, at the National Black Theater of New York located at 2031 Fifth Avenue in NY, Mr. Stringer would be joined by honorable members of his office and distinguished guests and citizens of his city and its African community to honor the work of Catherine and her fellow Africans.

Written by Oral Ofori of TheAfricanDream.net

Half of a Yellow Sun is NOW PLAYING in NYC!