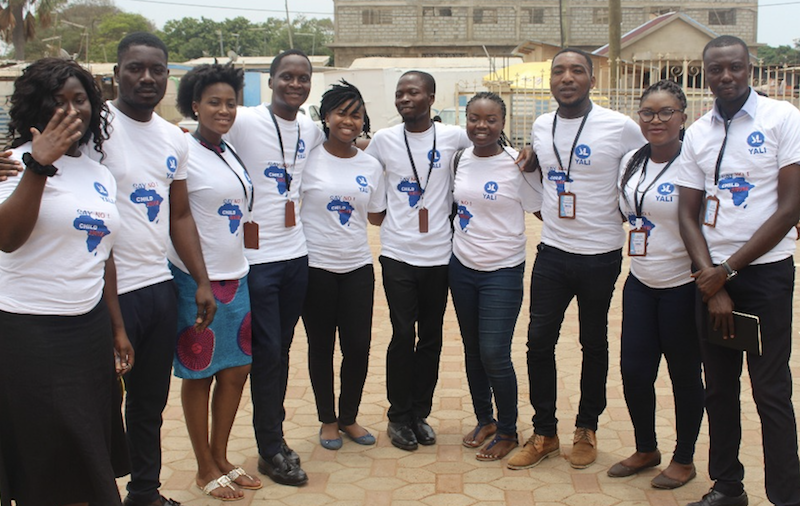 Ten individuals from the Young African Leaders Initiative (YALI) embarked on a project in Ghana with the objective to create sensitization on child abuse and its effects on society. The group also looked into ways to prevent this problem.

A report from Ghanaian Against Child Abuse (GACA); a child protection social drive launched in November 2017 spurred the group into action. According to that GACA report, there is presently more than 90 percent of children in Ghana that have experienced some form of physical violence and more than 21 percent of women aged between 20 and 24 who were married before age 18.

In a conversation with TheAfricanDream.net about the April 2018 project held at the Pentecost Church in Tema, Community One, at the port city of Tema Ghana, Francis Amesawu said “sixteen percent of girls aged between 15 and 19 years had their first experience of sexual intercourse forced against their will.”

According to Francis, an estimated 23 percent of children aged between five and 14 years are engaged in some form of economic activity in Ghana based on information from the GACA report.

“Our YALI group, selected from an online cohort of over 700 people and trained over a 6-month period, intended to equip both children and parents with basic life hacks to identify the many forms of abuse and how to defend and report against them,” Francis said.

Many of these children simply want to live, and if they are born to single parents who are themselves young adults or live in broken homes, it becomes hard to even for them to realize they are being abused, according to some members of the audience at the event.

“If these kids had people to care for them, they wouldn’t find themselves in some of these unfortunate circumstances that force them to beg on the streets, forsaking their education,” said Eleanor Gaysie to TheAfricanDream.net.

Attendees got sensitized on four major forms of abuse which the YALI group pointed out to include emotional abuse, sexual abuse, physical abuse, and neglect. A few of the things that were done to tackle the situation involved charging the audience to share what they now know with their neighbors as a way of empowering the vulnerable in society.

Training on proper parenting was given to help in the handling of kids and how to get them therapeutic help in cases of abuse.

Victims were encouraged to share their ordeals as it could create a platform that helps with the healing process. Child abuse can occur anywhere, especially in places deemed safe like schools, religious institutions, and even homes. Coming together to fight the problem was therefore very important Sharon Owusu shared, a project member.

YALI is a signature effort to invest in the next generation of African leaders. Through the YALI Network, young Africans connect with other leaders in their community and access free online courses in topics ranging from entrepreneurship to human rights and civic participation.

For a fuller report on this project and the group’s upcoming projects which hopes to engage mentorship teams comprising social welfare workers to provide or facilitate guidance and counseling for parents and children contact the project via email address edinam1995@gmail.com.