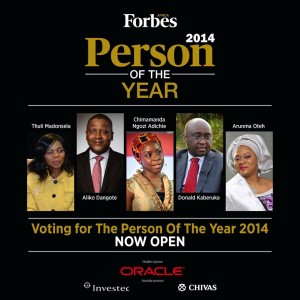 Forbes Africa proudly presents its Person of the Year Awards 2014, for “the individual who, for better or worse, has had the most influence on business on the year gone by”. The Forbes Africa Person of the Year Awards has, since its inception three years ago, attracted the highest calibre of nominees from across the continent. Forbes Africa invites your participation in what is fast becoming one of the most momentous and anticipated annual events in Africa.

Chimamanda Ngozi Adichie is world-renowned Nigerian author who penned Half a Yellow Sun – made into a Hollywood movie. She is also known for her “We Should All Be Feminists” TED Talk.

Thuli Madonsela is a South African advocate and the nation’s Public Protector. She helped draft the country’s constitution in 1994 and was named one of Time’s 100 Most Influential People this year.

Aliko Dangote is Africa’s richest man by far. Dangote’s company contributes considerably to the economy of Nigeria and the business mogul has donated large amounts of his wealth to community development and upliftment.

A Rwandan economist and the president of the African Development Bank, Donald Kaberuka has ushered in significant change for the continent having been at the helm of the AfDB for almost 10 years.

Arunma Oteh was appointed the director-general of the Securities and Exchange Commission in 2010. She is responsible for the regulation of the country’s capital markets, which includes the Nigerian Stock Exchange.

These people are positively impacting Africa’s image. Let’s all help Forbes Africa to honour them by voting for ‘Africa Person of the year’ ! We have voted! Have you? What are you waiting  for?

Click here to vote for your Africa Person of the Year

Aliko Dangote: An in-depth look at how Africa’s richest man made his fortune