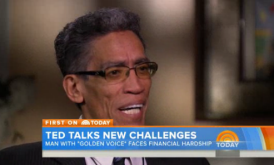 Ted Williams, the Ohio homeless man with the golden voice who was panhandling on a street corner three years ago when a Columbus Dispatch videographer filmed video of him that quickly went viral, hasn’t had the easiest road since his newfound fame.

Appearing Monday on Today, Williams told the NBC morning show that since the video of his smooth-sounding voice made him a star, he has battled depression, drugs and made a few bad business deals. Everything, Williams said, just happened so fast.

“One day I’m homeless with not two pennies to rub together, and then the next day I’m in Hollywood,” Williams told Today’s Kevin Tibbles.

Willams said that he lost his car and his condo but noted that he has been getting voice-over work as of late, and with the right support, he can see things improving.

He told Today that he has found some solace in giving back and helping the homeless. He noted that he has been drug-free for 22 months and he knows, if given another chance, he could really do better this time.

“I had a cloud covering that star,” he said. “Now that cloud is slowly moving away.”.