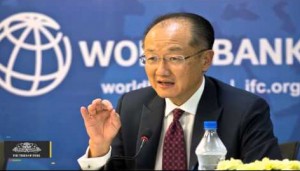 World Bank Group President Jim Yong Kim will arrive in Ghana on Thursday, October 30, 2014, for meetings with Vice President Kwesi Amissah-Arthur and other country officials. Dr. Kim will also meet with officials of the UN Mission for Ebola Emergency Response (UNMEER) to discuss the Ebola epidemic and its debilitating impact on the three most heavily affected countries – Guinea, Liberia and Sierra Leone – and on the West African sub-region as a whole.

The Ebola epidemic continues to spread exponentially in Guinea, Liberia and Sierra Leone. It has ravaged families, health workers and communities; disrupted normal life; and led to a breakdown of already weak country health systems.

If the virus continues to surge in the three worst-affected countries and spreads to neighboring countries, the two-year regional financial impact could reach $32.6 billion by the end of 2015, dealing a potentially catastrophic blow to already fragile states, according to a recent World Bank Group report, The Economic Impact of the 2014 Ebola Epidemic: Short and Medium Term Estimates for West Africa.

The World Bank Group has mobilized a $400 million financing package to help the three countries hardest hit by the epidemic contain the spread of infections, help communities cope with the economic impact of the crisis, and to improve public health systems.

A major obstacle to containing and stopping the epidemic is the lack of massive, rapid and coordinated deployment of health workers, especially foreign medical teams. A massively scaled and coordinated international response with qualified, high-caliber foreign medical teams is needed to set up and maintain effective Ebola treatment centers and other health facilities to support affected countries, stabilize the situation, and help prevent the further spread of Ebola, while also reactivating the provision of essential health services for non-Ebola conditions.