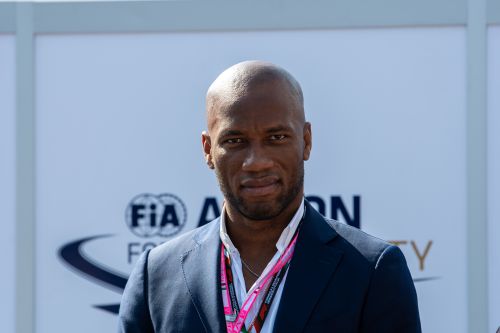 The greatest of all time, soccer player has been honoured greatly on his birthday by his fans across the globe and the various clubs he played a pivotal role in the world of football.

His soccer colleagues also paid tribute to the living legend on his 43rd birthday celebration for the never ending excellent skills displayed as a professional footballer.

Knowns officially as Didier Yves Drogba Tébily, was born on March 11 in Abidjan, the capital of Ivory Coast. Drogba spent few years of his childhood age in France where he was raided by his uncle who was then a professional footballer.

Drawing inspiration from his uncle, he gained passion for football and decided to follow his passion at age five by making soccer his hobby and played almost every day at a car park where he lived. Later on, his parents moved to France.

Developing his professional skills, Drogba joined a French local sporting youth club, Levallois as an apprentice where he contributed exceptionally and impressed the team’s officials when he was just 15 years old.

At 21, he signed his first professional deal with Le Mans Club in Ligue 2, a France professional soccer league. He served the club from 1998-2002.  Drogba then moved to another club known as, Guingamp, between the years 2002 and 2003 where he scored 17 goals out of his 34 appearances.

In 2004, he stepped up his game by signing a prestigious contract with Premier League Club, Chelsea where he made remarkable impact on the team with his dribbling skills as the club’s striker.

It also inspired African players and served as a measure to explore their unknown abilities that earned them both local and international recognition.

Didier Drogba played a major role for Chelsea FC by helping the team to win its first Premier League Champions after 50 years while he made his debut appearance for Chelsea.

His subsequent roles for the clubs was such incredible that, he gained extraordinary titles in his name. He was recognised by FIFA for being the first Ivorian player to score a goal in the 2006 World Cup.

He is also the only African player to score highest goals for the club and 100 goals in Premier Leagues.

Aside his massive contribution in soccer, Drogba has taken up several social and philanthropic projects to help young ones in fulfilling their dreams through his Didier Drogba Foundation which was established in 2007.

Today we celebrate a true legend of Africa and the world at large. Happy birthday Didier drogba.