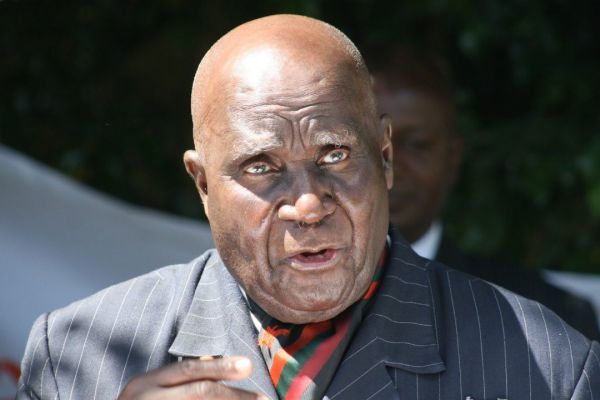 The first president of the Republic of Zambia, Kenneth Kaunda who died on June 17, 2021, of pneumonia has been mourned in a special memorial service in Zambia.

The incumbent president of Zambia, Edgar Lungu declared three weeks of official mourning for the late former president of the country.

Honoring one of Africa’s forefathers against apartheid in South Africa, the president of Zambia suspended all entertainment activities as part of the state’s last respect to the late Kenneth Kaunda. His body remains were then moved around the regions of Zambia for the citizens to pay tribute to the father of the land.

On Friday, July 02, 2021, at the Lusaka show grounds, the government of Zambia held a memorial service graced by several heads of state and dignitaries for the late former president of Zambia.

Dr. Kaunda, Zambia’s founding father’s coffin was adorned with the flag of the country and was carried by the Zambian military at the memorial grounds.

The military bid the former commander in chief of the army a farewell with a 21-gun salute at the memorial ceremony.

‘when an old man dies the villages loses its library’

States officials including the president of the Republic of Ghana, Nana Addo Dankwa Akufo-Addo, South Africa’s President, Cyril Ramaphosa, African Union chairman Moussa Faki Mahamat among several others paid their last respect, recounting the legacy of the late father of the land of Zambia and the African continent.

His final funeral rites and burial service will be held on Wednesday, July 07 in a private ceremony with his family. He was 97 years old.

Kenneth Kaunda was born in April 1924 in Northern Rhodesia, present-day Zambia a politician and a teacher. He completed his education in the year 1940 and took a job role in teaching at Lubwa.

President Kaunda was then upgraded to a housemaster and then to a headmaster at the same school. Between 1947 and 1948, he moved to the coper mining area as a mine welfare officer and founded farmers Cooperative. In 1949, he worked as a Boarding Master at the Mufulira Upper School.

His political career began in the year 1950s where he contributed to founding the African National Congress (ANC) which sought to fight against racial discrimination in Central Africa. He took up the role as a general secretary for five years after it was founded in 1953 under the administration of President Harry Nkumbula.

I have been joined by fellow African Heads of State and other dignatories from across the world for a state funeral for our beloved founding father, Dr. Kaunda, in Lusaka.

Dr. Kaunda was not only a national asset, but an African icon whose influence was felt across the continent pic.twitter.com/TK1NknFCqb

Later, he separated from President Nkumbula and became the president of the Zambia African National Union from 1958 to 1959. His party was then banned over the civil war and was incarcerated for nine months. Upon his release, he founded the new United National Independence party in 1960 and took the position of president.

Two years later, he was elected to the Legislative Council. He formed an alliance government with Nkumbula’s ANC where he was offered the ministerial role of local government and social welfare.

In the process of Zambia’s independence, the country went through series of hitches but became successful with the help of the skillful diplomacy of Kenneth Kaunda over the European and smaller Asian community.

Zambia then gained independence in October 1964, Kenneth Kaunda as its president. He served as president for 27 years