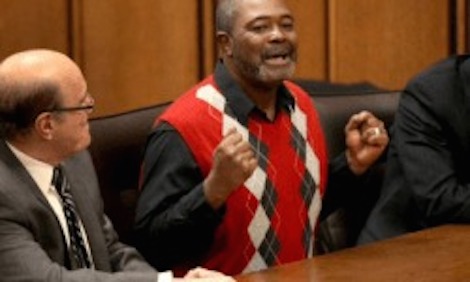 Is Rihanna pregnant with her 1st child?

An Ohio man who spent 27 years in prison for a crime he didn’t commit was brought to tears Tuesday when a judge dropped all charges against him. Kwame Ajamu, 56, was the last of three men exonerated in the 1975 robbery and murder of a Cleveland-area money order salesman.

“I’m so happy today that this battle has come to an end,” said Ajamu, formerly known as Ronnie Bridgeman, as he wept and thanked his attorneys and wife before hugging the judge and the prosecutor.

The two other accused, Ajamu’s brother, Wiley Bridgeman, 60, and Ricky Jackson, 57, were released from prison last month. The men won their freedom after a witness last year recanted his testimony from the trial, saying he was coerced by detectives at the time. Ajamu was originally sentenced to death, but it was vacated because of a paperwork error. He later earned parole in 2003.

In 1975, two people had attacked Harold Franks with acid, and one of the people shot him. A third person drove a getaway car. A 12-year-old boy, Eddie Vernon, served as the state’s main witness in the case, and a jury convicted Bridgeman (as he was known at the time), along with his brother Wiley Bridgeman, then 20, and Ricky Jackson, 19…

Defense attorney Terry Gilbert said that Cuyahoga County prosecutors took a courageous stand not to fight the dismissal of charges against the men. Prosecutors also said they won’t stop the trio from seeking more than $4.1 million in compensation from their wrongful imprisonments..

Is Rihanna pregnant with her 1st child?