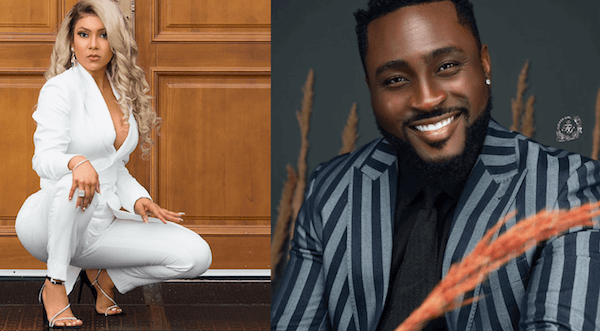 The house in the past weeks has been exciting and fun with mixed reactions regarding Pere (Pere Egbi) and Maria’s s relationship. Fans are left wondering whether the romantic scenes the two were captured in has something to do with them outside the house.

While some fans wonder, others believe that they wouldn’t be surprised if Pere and Maria (Maria Chike Benjamin) are intimate in real life because they look good together. There were instances where the two were filmed emotionally attached, where the chemistry between them was very strong.

The pair’s relationship was so evident before the rest of the housemates. However, Pere was gradually drawing away from Maria, which seemed strange and out of character, and the housemates realised it and had to inquire why the sudden change towards Maria. He gave few reasons that Maria was indecisive and tried to tarnish his image before the entire housemates by falsely accusing him of what he didn’t do or say. Maria wasn’t forthcoming  about most of the things she said to him, and it was messing up his persona in reality.

Again, he explained that Maria was trying to protect their relationship outside the house by playing the victim to create a positive perception about her in the public’s eyes to protect her relationship outside the house, which was the exact opposite behavior of her—adding that even when they had gotten intimate at some point, Maria came out to deny the fact that they were intimate, which he found annoying.

All these revelations had to pop up because Pere also denied that, the housemates thought he sounded emotionally unstable after Maria’s eviction. He went ahead to tell the housemates that he was trying to know Maria very well. Still, it turned out that Maria wanted to give the world a wrong impression of his personality even though he looks quiet and reserved in the house, which is his real nature.

Following Maria’s eviction, Pere has been acting soberly and was spotted dancing alone even at the house party on Friday and Saturday, making it so obvious that Maria’s absence affects him emotionally.

According to various reports from the house, Pere is now finding it difficult to connect with the rest of the female housemates. This is because Pere disclosed that Maria was the reason he couldn’t associate himself with any female because she was upset with him anytime he attempted despite acting like she didn’t care. Since he didn’t want to hurt her feelings, he had to maintain his loyalty.

That’s why he’s changed suddenly and was captured dancing alone since Maria had always been his dancing partner. Yet, Maria has relentlessly stated she doesn’t want to be friends with Pere outside the house. Though fans are saying they do look good together, it’s isn’t easy because they both have a relationship outside the BBNaija House.

A much as fans don’t want Pere to be evicted from the house, they believe he’s not very happy since Maria was evicted. Maria seems to have won the hearts of many. That is why even after weeks of her eviction, she is the most talked about contestant among the 15 evicted from the house fans are still talking about.

We can’t wait to see what happens when Pere is out of the house 🤔 . Do think Pere And Maria will be reunite as platonic friends?

Leave your comments below