Apollo Nida Tells Phaedra Parks She is Selfish And Fat

President John Dramani Mahama returned home Wednesday evening after an official visit to Italy.He was met on arrival at the Kotoka International Airport by the Vice-President, Mr Kwesi Bekoe Ammisah-Arthur, the Chief of Staff, Mr Prosper Bani and other government officials and service commanders.While in Rome, the President held talks with Pope Francis, the Head of the Catholic Church. He also met with Peter Cardinal Appiah Turkson, Head of the Pontifical Council for Peace and Security, the Cardinal Secretary of State, Pietro Parolin, and Archbishop Dominique Mamberti, Secretary for Relations with States. 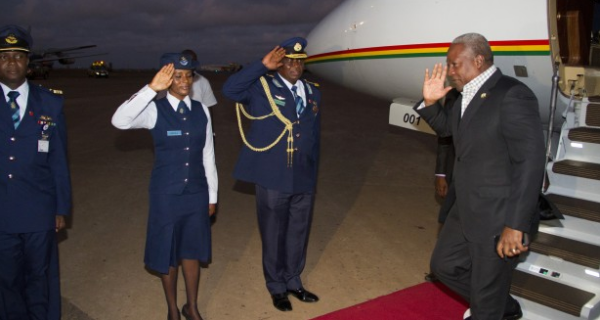 As part of the visit, President Mahama addressed the second session of the Executive Board of the World Food Programme ( WFP) in Rome.The President was accompanied by his wife, Lordina and the Minister of Foreign Affairs and Regional Integration, Ms Hannah Tetteh.

Apollo Nida Tells Phaedra Parks She is Selfish And Fat