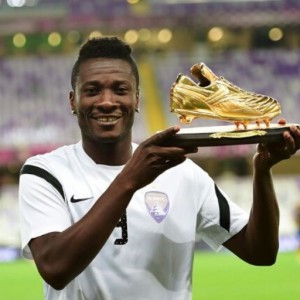 Gyan emerged the top scorer of the competition with 12 goals in Al Ain’s campaign which ended at the semi final stage.

The 28-year-old’s awarded will be handed over to the UAE FA for onward transfer to the former Sunderland player.

“Al Ain’s Ghanaian player Mr. Asamoah Gyan’s consistent and excellent performance in the AFC Champions League scoring a total of 12 goals and helping his team reach the semi finals of the competition is an to be proud of,” a letter signed by the AFC General Secretary Dato Soosay to the UAE FA read.

“On behalf of AFC President and the AFC Executive Committee members, it is our honour to present the AFC Foreign Player of the Year 2014 accolade to Mr. Asamoah Gyan.

“The award will be sent to your association this month and we wish all the best to Mr. Asamoah Gyan for the future.”