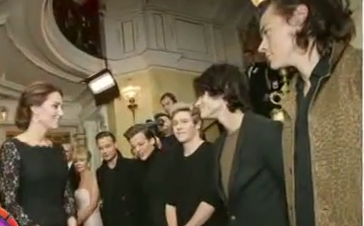 Prince William and Kate Middleton made a stunning appearance for the Royal Variety Performances at the London Palladium on Thursday night, and upon their time at the event, the Duke and Duchess of Cambridge finally met the boys of One Direction.

The royal couple chatted with the band about their touring pla

“I said congratulations on the bump,” Harry said after meeting the pregnant royal, though he added that she “didn’t look bumpy.”

Royal Baby News: Kate Middleton Has Given Birth To A Baby Girl

Royal baby: Duchess of Cambridge in early stages of labour