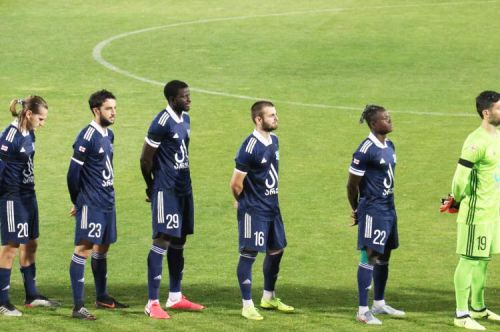 Ghana national team, the Black Stars of Ghana defender and former Asante Kotoko defender, Samuel Inkoom has been named among the 11 best team of his International Football Club, Samtredia in the Georgian Erovnuli Liga Team of the week.

This achievement was as a result of Inkoom’s brilliant and immaculate performance during the weekend in a 1-1 draw against their opponent Club, FC, Dila Gori.

He is the only player selected from his team to be part of the Georgian National League Best 11 in their third-round football matches.

Over the weekend, five matched were played among ten teams.

After the games, the Georgian national league presented 11 icons for the week.

According to the Georgian National League, these 11 players were extraordinary during their matches that’s why they make the best 11 team in their third week.

Nonetheless it’s the wish of the international defender to be selected under the administration of coach C.K. Akonor for 2021 African Cup of Nations (AFCON).

The defender is hoping his remarkable performance for his club in the Georgian Erovnuli Liga appeals to the head coach of the Black Stars of Ghana as he prepares to join the national team.

Until his Samtredia deal, he was playing for FK Dunav where after 14 appearances in their soccer competition couldn’t renew his contract due some glitches he faced.

Commenting on his Georgia deal, the defender stated that, he’s going to give in his best with intensive training and hard work to make his club champion in the Georgian league.

He further explained he’s more comfortable with the conditions associated with his deal and would consider it as the best.

He has performed impeccably since his appearance in the club because his aim is to support the team with his astounding skills to achieve their goal.

According to Inkoom, he’s impressed with the teams plan and the management process because they contribute immensely to the success of the club.

Inkoom’s incredible defending tactics has seen him work with both local and international soccer teams such as, Kumasi Asante Kotoko, FC Base, Swiss, Ukraine, Antalyaspor in Turkey, Platanias in Greece, D.C. United, Vereva in Bulgaria and FC Dunav Ruse.