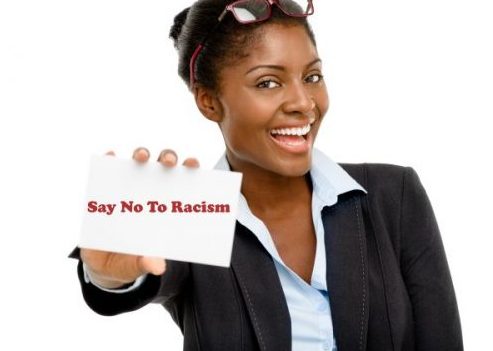 Many African/Black Football players and athletes African Celebrities, black people are constantly being trolled and abused just because of who they are.  When will bigotry, Racism, isolation… end?

What people turn to forget it that, no one can chose their height, age or race. We all have to make conscious effort to live in peace and say no to racism.

“People must learn to hate & if they can learn to hate, they can be taught to love, for love comes more naturally to the human heart…’ ~Mandela

Hating people because of their color is wrong and it doesn’t matter which color does the hating. It’s just wrong. ~ Muhammad Ali

“Ignorance and prejudice are the handmaidens of propaganda. Our mission, therefore, is to confront ignorance with knowledge, bigotry with tolerance, and isolation with the outstretched hand of generosity. Racism can, will, and must be defeated.” ~Kofi Annan

‘No human race is superior; no religious faith is inferior. All collective judgmentsare wrong. Only racists make them’ ~ Elie Wiesel

Comparing the Duke and Duchess of Sussex’s baby to a chimp, just because he’s biracial. Not very nice! no matter how you interpret his vile tweet!

He had to look for that particular colonial photo to post, also this is not the first royal baby…  Let’s be realistic for once and ‘Say No To Racism’

#RoyalBaby: Comparing a baby to a chimp is VILE! #DannyBaker “People must learn to hate & if they can learn to hate, they can be taught to love, for love comes more naturally to the human heart…' ~Mandela#racism #racist
'We all bleed in same colour' Sickening #SayNoToRacism

So not only does Danny Baker post an image comparing a baby w African heritage to an ape, but he has the audacity to say problem is that those of us who point out how racist it is have “diseased minds”. Classic example of blaming those of us who call out racism for its existence pic.twitter.com/6gtKMpaHZY

Shocking Truth About Forts And Castles In Ghana

Caster Semenya: Race Against The Norms