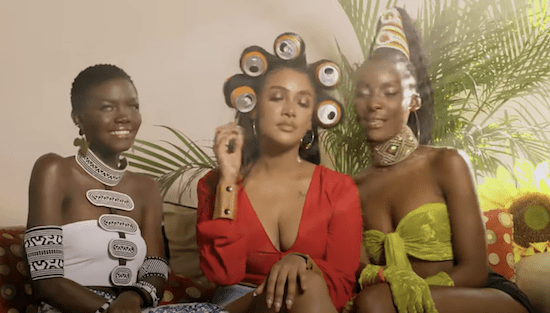 Tanasha Donna has released a new track titled, “Sawa”. The song was released  under her own record label and directed by Kenyan film director and entrepreneur, Ivan Odie.

As part of the promotion process for her latest song Sawa, Tanasha did a media tour by visiting media houses in Kenya to talk about her song.

The singer and model posted on her social media handles that she would have loved to do extra with the tour even out of her country but the world is now locked down.

The songs remind people to appreciate life and put love first in everything they do and learn to love yourself and those you’re surrounded with.

It also talks about learning to keep positive energy at all times because good energy brings about love, peace and unity.

The single is currently available on all music streaming platforms.

Tanasha Donna began music professionally after quitting her radio presenting job. Prior to her music career, she participated in beauty pageants and modelling.

As a beauty queen, she has invested in beauty products, hair and fashion by owning the brand called, ‘For Her Luxury Hair’.

She is also a video vixen and has been featured in several music videos of top-notch East African musicians including Ali Kiba’s, success song, “Nagharamia”.

Her debut music was titled “Radio” and was released in 2019. The music gained huge views with fans jamming to it due to its heavy reggae tone beat.

In February 2020 the model, dropped another banger, “Gere” with her former partner Diamond Platnumz.

She also studied Tourism Management in Belgium which made her mastered in languages like English, Spanish, Dutch, French and Swahili.