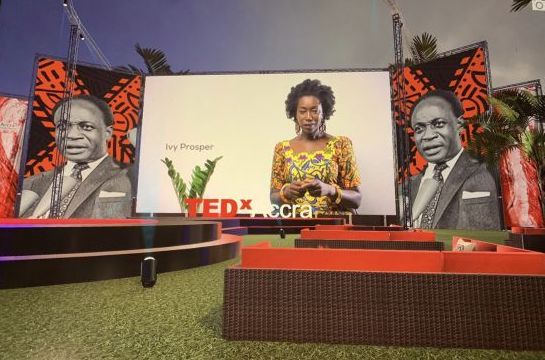 After an amazing Tedx Accra Day 1, the second day of the event finally dawned. Like the first day, Tedx Accra Day 2 event kicked of with another wake-up call poem from the talented poet and activist, Lamer Kofi James.

In the poem, Lamer emphasizes on Africans’ need to change their mindset, turn away from the influence of the western world, and remain true to who they are.

From how we communicate with each other, to doing businesses and any other day-to-day activities, social media impacts them all.

On Day 2 of the TedxAccra virtual event,  Max Rivera, head of EMEA Expansion and a social media guru who oversees Snapchat’s commercial expansion into Latin America, Europe, the Middle East, and Africa, touched on the evolution of web, devices, communications, and cameras, which are all key components related to social media.

According to Max, the intention of addressing this topic was to provoke and open a dialogue which would either lead to a short history lesson, or spark some powerful ideas.

The virtual event also would not be complete without someone addressing the issue of climate change.

In attendance to the show was Yayra Agbofah, a creative social entrepreneur from Ghana who co-founded AfroDistrict, a creative hub and consultancy addressing social and environmental issues through art, education, and entrepreneurship.

While addressing the virtual event, Yayra talked about several things that are resulting in excessive environmental pollution in Africa, among them being over-reliance on the use of plastics and the excessive importation of second-hand clothes that ends up thrown away.

Yayra also touched a bit on what can be done to prevent further environmental pollution and safeguard our planet including producing and purchasing what we can use and using biodegradable materials.

Another speaker who graced the virtual event was Mohammed Shehu, a data-driven marketing professional and content strategist helping simplify and refine brand messaging for high-growth startups. Shehu addressed one of the major challenges facing the African youth today after completing their education.

For most Africans, the end of the college studies marks the beginning of another daunting journey of finding something to do in the professional world.

The journey is never easy. According to Shehu, if you want to stand out in the professionals’ world, young African professionals need to start thinking globally; they need to equip themselves with the mentality that it’s possible to work anywhere in the world in the contemporary society through remote working.

To achieve this, schools need to shift to curriculum systems that emphasize on the skills that the new wave of remote working will need such as critical thinking, searching and digesting information digitally, clear writing, and effective personal marketing.

You can watch the entire TEDx Accra 2021 event on Ceek.com

The co-founder of ScaleUp Africa, Ammy Gyampo was also present in the live event. Ammy addressed the various challenges a typical African woman faces in the pursuit of providing for her family.

Kym Oliver, a writer, speaker and the co-founder of Triple Cripples addressed the various challenges people with disabilities in Africa go through, including stigmatization and lack of support from the government.

Iyonoluwa Aboyeji, the General Partner and co-founder at Future Africa, took a moment to say something about the future of the continent, while reminding everyone that every African is the future and posing the question of how Africa can plan to rebuild for the future with the challenges we’re facing as a continent.

Being a storyteller, the stories western media and other publishers tell about Africa doesn’t sit well with Ivy, just like many other Africans. Ivy addressed the issue of how western media and countries’ narratives portray Africa as a continent full of hunger, diseases, and wars. Ivy, like many other Africans believe that the best way to tell our story to the world is if we do it ourselves.

On the other hand, Michael Amey, the CEO of KOI International Worship Center, addressed about the possibilities that come with daring to dream.

Michael emphasizes that anything you dream about and focus on it, you’re guaranteed you’ll achieve it. Also present was the founder and CEO at Brand Leadership Group, Thebe Ikalafeng. Thebe, who is a seasoned leader addressed the common topic of why Africa is not where it should be.

With so much beauty, diversity, and potential in Africa, Thebe attributes why Africa is lagging behind to Africans and what they have done to themselves. According to Thebe, the only way Africa will move from where it is to where it’s supposed to be is if the Africans themselves wake up and choose to pursue that route.

Africa needs more of this kind of events in order to unlock their full potential.

As we all crave for a change, always remember change starts with you. If you want to see change, be the change; wherever you are, whether in Africa or in the Diaspora.