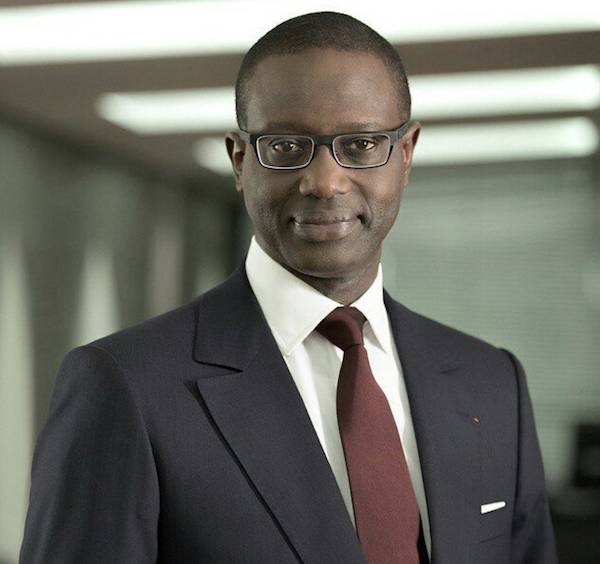 Tidjne Thiam is a prominent French-Ivorian businessperson and a banker who has been serving the in the Swiss multinational investment bank known as Credit Suisse in Switzerland as the Chief Executive Officer since March 2015 and resigned in February 7, 2020.

The renowned mogul was born in July 1962 in Ivory Coast into families of great politicians from Senegal and Ivory Coast.

He holds double citizen of Ivory Coast and France, fluent in English, French and German.

Before working as the CEO for Credit Suisse, he held the position of Chief Financial Officer for British banking company known as Prudential Plc from 2002 to 2007 then in the same financial institution he served as the CEO till 2013 in the United Kingdom.

Before working with the Mckinsey business company from 1886 to 1994, he studied Advanced Physics and Mathematics in France.

He later left France to ivory coast and worked for the first time as the CEO of the National Bureau for Technical Studies and Development (BNETD).

After the 1999 Ivorian coup, he continued a private sector career and returned to France in 2000, stayed and worked as a senior executive at Aviva Plc for two years before he got employed by Prudential Plc.

Then in March 2009 he officially became the Chief Executive till his departure in march 2015.

His position at the Prudential financial institution, made him the first African to lead a Financial Times Stock Exchange (FTSE) 100 listed company.

He joined Credit Suisse in 2015 where he became the Chief Executive Officer by appointment.

He worked and was able to see the bank progressing economically and jobs in his first two years in that position.

He has successfully turn around Credit Suisse, the bank has seen huge growth

So many people have been supporting  and backing Tidjane Thiam for his amazing work.

He has gained a lot of recognitions internationally. Most  Investors are happy with Tidjane Thiam’s performance, he has delivered on his 3 year strategy, as compared to other bank Ceos’

Application for the World YWCA Internship Programme 2017 is now open

Diébédo Francis Kéré: How to build with clay in a modern way