Evans Wadongo is Shining the Good Light in Africa

A Nigerian writer notable for his plays and poems, in 1986 Akinwande “Wole” Soyinka was the first African to be awarded the Nobel Prize in literature. Soyinka bases his writing on the mythology of his own Yoruba tribe and connects his plays to traditional African theater, dance, and music. Though he primarily considers himself a playwright, he has written novels and several volumes of poetry. After earning his doctorate in the United Kingdom, he worked at the Royal Court Theatre in London, where he wrote and produced plays. He later returned to Nigeria to study African drama, start an acting company, and teach literature and drama at the country’s universities.

Chimamanda Ngozi Adichie Nigerian-born Adichie is the author of three novels, most recently the critically acclaimed Americanah. The book describes the affecting journey of a Nigerian woman who takes her chances in America as an emigrant, not because of poverty or hunger in her homeland, but to escape what she calls the “oppressive lethargy of choicelessness.” The book is also a penetrating discourse on what it means to be black and how views of identity differ betweenAfrican Americans and American Africans. 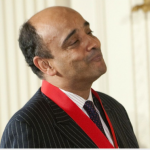 British-born, Ghanaian-American philosopher and writer Kwame Anthony Appiah has a range of intellectual pursuits that includes the history of ideas in Africa, moral and political theory, the philosophy of language and mind, and fiction writing. His nonfiction book, “The Honor Code: How Moral Revolutions Happen,” explores how a sense of honor can both perpetuate an abhorrent practice like slavery and bring about its end. After growing up in Ghana, Appiah earned his Ph.D. in the United Kingdom before moving to the United States to teach philosophy at Harvard, Duke, Princeton, and other universities.

Evans Wadongo is Shining the Good Light in Africa