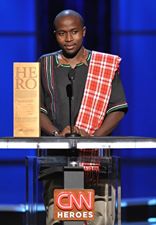 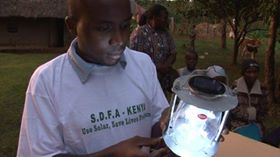 Evans Wadongo Listed Among Top Global Innovators 35 by MIT & CNN: The 28 year-old Kenyan engineer designed a solar-powered LED lantern called MwangaBora (Swahili for “Good Light”), an invention which is fast replacing smoky kerosene lamps and firelight in rural Kenya where there is little or no electricity. As a child, Wadongo strained to read by the dim light of a kerosene lantern, the smoke from it as well as having to share with his four older brothers. His eyes were irritated, and he often was unable to finish his homework. “Many students fail to complete their education and remain poor partly because they don’t have good light,” says Wadongo.
Wadongo started wondering how to improve conditions for children in communities similar to his home village. As a freshman he designed a manufacturing system for portable LED lamps that could be recharged by sunlight using off-the-shelf photovoltaic panels, batteries and LEDs. Wadongo has changed the lives of tens of thousands of his fellow Kenyans living in poor rural communities by supplying them with the lamps. What a life changer!