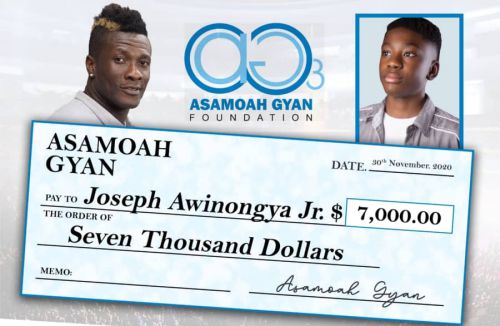 All-time goal king of the Ghana national team, the Black Stars, Asamoah Gyan has lifted up high the dream of a 13-year-old Ghanaian boxer, Joseph Awinongya Jr. based in the United States with a donation of 7,000 US dollars equivalent to 40,915 Ghana cedi.

The offer was officially handed to the little boxer mid today, November 30, 2020 at a press conference led by the captain of the black stars under his Asamoah Gyan Foundation.

Gyan announced his support to the talented young boy on his official social media handles as well as stating that Awinongya is blessed with a great talent and supporting him to develop his skills is very important.

The young boxer is said to have been preparing for an upcoming boxing competition in the United States.

Recommended Stories: Celebrities  Who Give Back

According to reports, the young boy’s achievements at this early age was fully supported by his father who has made it his key priority to nurture his son’s talents in order to reach greater heights in the world of sports with a lot of world titles in future as a professional boxer.

The young champion expressed his appreciation to the all-time leading goal scorer of the black stars of Ghana with joy and excitement on his Instagram page.

He also thanked all those who have contributed to achieving his dream as a professional boxer.

Asamoah Gyan Foundation was established in August 2011, with the aim of providing humanitarian supports to the needy especially, the youth and help solve societal problems through education, good water, sports opportunities and healthcare.

Since the establishment of the charity organisation by the general captain of the Ghana national team, the foundation has been working tirelessly in all the areas promised to achieve in their vision.

The Asamoah Gyan Foundation has been the restoration of water pumping system in the hometown of the player in the Brong Ahafo Region, provision of healthcare equipment in various healthcare facilities in Accra and Kumasi, educational supports to brilliant but needy students, scholarships as well as built an ultra-modern AstroTurf for Accra Academy.

As the captain of the Black Stars, the soccer player has extended his football dribbling skills in many soccer clubs around the world including the Ghana premier league where he commenced his full-time soccer career at the Liberty Professionals.

Some of the clubs include, Udinese, Modena, Rennes, Sunderland, Al Ain, Kayserispor, NorthEast United and his current club Legon Cities. 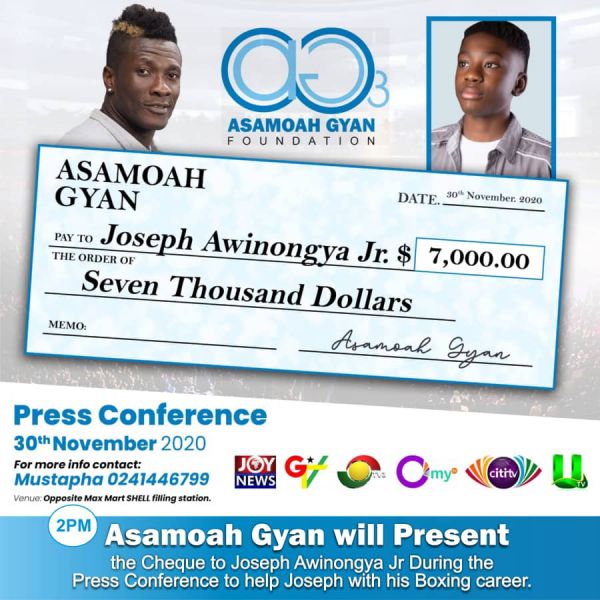 He contributed immensely with his phenomenal skills in the soccer fraternity to the above clubs he was signed on.

Gyan has achieved several honours and awards since he started playing soccer professionally. Contributing to the success of people and putting smiles on the face of the less privileged through his Asamoah Gyan foundation is just an amazing initiative.