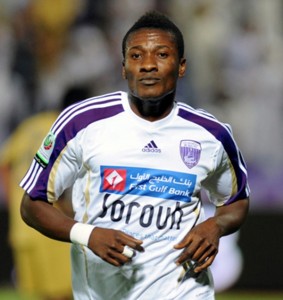 Ghana striker Asamoah Gyan broke the 100-goal mark for Al Ain. after scoring a double in the dethroned champions 2-2 draw with Al Jazira on Thursday night in the Arabian Gulf League. Gyan’s two goals took him to 101 in an Al Ain shirt in all competitions including the Asian Champions League. His first-which was the 100th- was a sublime finish after Gyan picked up a long ball from Yassine El Ghanassy, worked his way inside the box and scored off a deft shot for a 21st-minute lead. Gyan again neatly putt away a lobbed pass from El Ghanassy for the home side to go into the break with a 2-0 lead.

Asamoah Gyan has now scored a total of 81 league goals in 65 appearances.