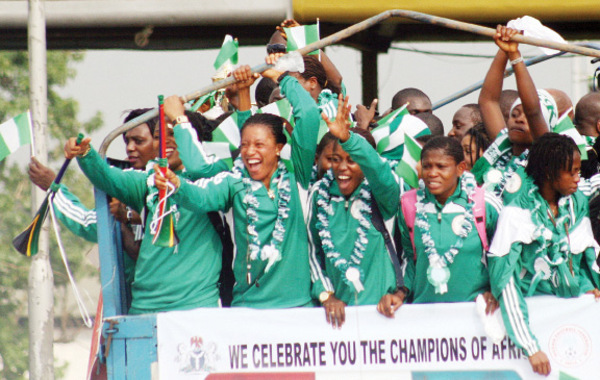 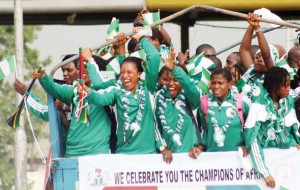 The Super Falcons of Nigeria have won the 9th edition of the African Women Championship after beating the Lionessess of Cameroon 2-0 at the Sam Nujoma stadium in Windhoek, Namibia.

In the final game, Coach Edwin Okon’s team showed supremacy as Desire Oparanozie and Asisat Oshoala scored in the first half to ensure Nigeria win the trophy for a record seventh time.

The victory, also means the Super Falcons have avenged the 1-0 defeat they suffered to the Lionessess in the third-place play-off of Equatorial Guinea 2012.

Twenty-year old Oshoala who won the golden ball at the Fifa U-20 World Cup in Canada, was named the Most Valuable Player of the Championship.

The Rivers Angels striker scored four goals and was a major influence in Nigeria’s quest towards winning the title in Namibia.

Nigeria’s confidence lies hugely on youngster Asisat Oshoala, whose first half brace inspired coach Edwin Okon’s team to a resilient 2-1 semi-final victory over South Africa and helped the former champions to become the first African team to qualify for the 2015 Fifa Women’s World Cup in Canada.

Interestingly, Oshoala’s superb volley in the 85th minute made the biggest difference as Nigeria overcame Cameroon 1-0 in an international friendly played in Abuja on April 30.

This is coach Okon’s first ever final in his international coaching career after being denied a final ticket at the Japan 2012 Fifa U20 Women’s World Cup as head coach of the Falconets.

He will be hoping to lead the team to next year’s Fifa Women’s World Cup that will be played from 6th June till 5th July in Canada.

Nigeria also became the first African team to qualify for the 2015 Fifa Women’s World Cup in Canada when they defeated South Africa 2-1 in the semi-final.