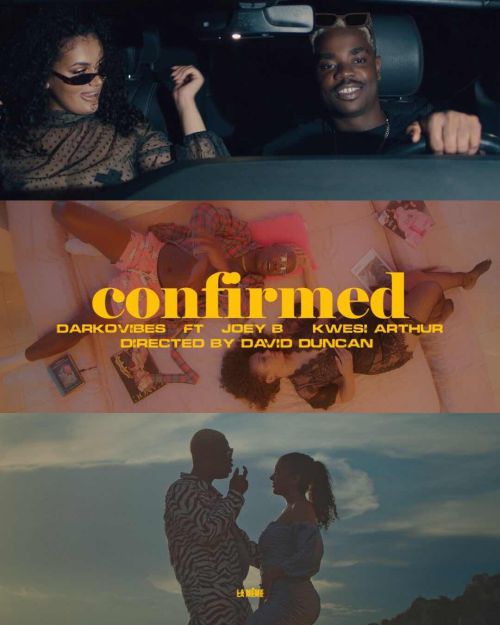 Darkovibes finds himself dabbled in an entanglement in the official visuals for ‘Confirmed’ which features Joey B and Kwesi Arthur.

It’s been four months since Darkovibes released his debut album, “Kpanlogo”, which was set to be one of Ghana’s hottest albums of 2020.

It delivered on expectations by racking up over a million streams worldwide on all reputable digital outlets. His visuals weren’t a slouch either, with single, ‘Inna Song’ netting the above milestone on YouTube.

The La Même Gang rockstar looks to put out new music as he recently announced a deluxe edition for the album in tandem with visuals for ‘Confirmed’.

Shot by David Duncan, the video depicts Darkovibes’ lover playing a wild heart-hurting game with both guest artists on the song.

With shots capturing bright natural environments, to fizzy dance moves from Darkovibes, the video starts with Kwesi Arthur crooning by a bonfire/camp set up, laying his frustrations on the production, on a smooth late-night drive.

Joey B also gets entangled in the love web, before finding out her affair with other artists in the song.

Darkovibes performs his verse with his presumed lover looking squeaky clean in a zebra stripped outfit, actively dancing in scenes which transition from a hill top and construction site, to a bedroom where she’s captured in some lingerie.

The variety captured in the video help give off a buoyant and pleasant aesthetic, amid top notch color grading.

Visuals for ‘Confirmed’ are daring, flirty and super immersive, with excellent storytelling at its helm courtesy of its solid acting and tasteful editing. It is simply a must watch!

KashBwoy Teams Up With Joey B for New Banger MARIA

Kpanlogo Album By DarkoVibes Out Now!