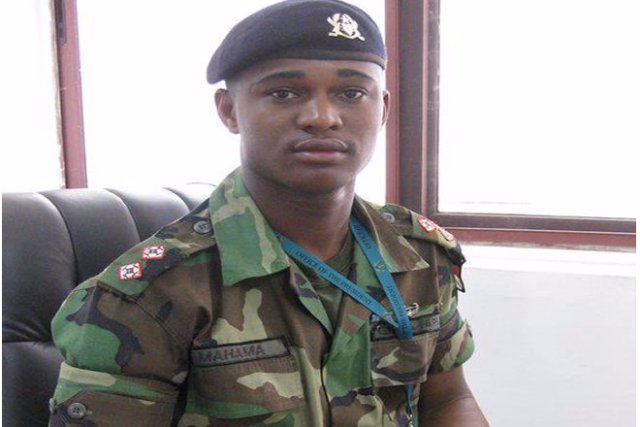 Captain Maxwell Mahama Update – KABA of Asempa fm revealed that all that we heard earlier abt Capt. Mahama’s death were lies! He was trapped by the negligence and power play within the military high command and some opinion leaders in Denkyira.

The newest twist is that:

1. Captain Max had been leading the troop in that area since the beginning of the year (for 3 months)

2. After the three months, he was replaced by a Lieutenant, so that he (Maxwell) could return to Accra to write his promotion exams towards the rank of Major.

3. In his absence, the Lieutenant did some massive operations, seizing galamsey equipment of these same (Denkyira) people.

4. The aggrieved galamseyers called for a meeting with the Lieutenant, of which he refused to attend.

5. Instead, he sent four soldiers under his watch to Denkyira Oboasi, to listen to the people.

6. The soldiers were nearly killed at that meeting. But with their good number and united front, they cocked their guns, moved back to back against each other to safety and escaped by the help of a pick up vehicle.

7. This was reported by someone in authority, in the Denkyira area, to Accra. The Lieutenant however failed to defend his men. So the four soldiers were rather recalled to Accra and locked up in guard room, until the death of Max.

8. After his promotion exams, Max returned to take over his oversight responsibilities at the base. But he was not briefed abt the earlier situations. At this point, it is believed almost all the soldiers there at the base were new to the developments.

9. A new meeting was scheduled with Max and the galamseyers, which he attended. It was on this day that he was ambushed and deliberately murdered to destabilise the military operations there.

10. The DCE might be aware of all these. That’s why he was quick to justify the murder, in defence of the killers.

11. It is not reasonable to jog for over 10 km in jeans and military boots.

12. There is anger, division and uncertainty among soldiers all over the country!

13. When contacted, the Military high command refused passing any comments on the revelations, claiming they are investigating the issues.

Hmmm, Ghana!! Max was just a victim of circumstances, dying for the actions of the Lieutenant and the Military high command.

We pray for Justice for Capt. Mahama

‘Them that the perpetrators of this heinous crime will be arrested and dealt with in accordance with the laws of our country. No one involved in his murder will go free’~ Nana Addo Dankwa Akufo-Addo

According to reports, the Late Capt Maxwell Mahama of the 5 Battalion of Infantry was lynched by some youth while he jogging early Monday morning. He was one of those military men who were protecting Chinese small-scale miners (galamsey) at Denkyira-Obuasi in the Central Region, Ghana.

He was allegedly stoned and burnt by the youth of the area who claim they mistook him for an armed robber.

Minister of Defence Designate, Mr Dominic  Nitiwul  told reporters that, he is hopeful that one of the captured alleged killers if quizzed, can provide a good lead for investigators. 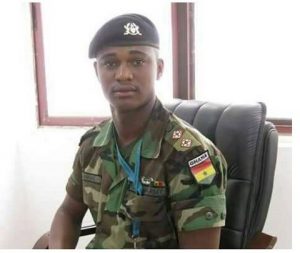 The late Captain Maxwell Mahama’s uncle Prof. Fred Mark Bagonluri  says his ‘nephew wasn’t ‘just a soldier, he was a scholar and that Maxwell lived and breathed the Ghana Armed Forces” and that his nephew told with him a few weeks ago his plans to further his education at the post-graduate level’

The Minister of Defence Designate, Mr Dominic  Nitiwul said Maxwell’s father believes there is more to the story than meets the eye.

Most Ghana’s also believe there is more to the story as nothing seems to make sense. Most want answers and justice to what the call senseless death.

Our thoughts and prayers are with his family, especially his wife and 2 kids during this difficult time

I assure them that the perpetrators of this heinous crime will be arrested and dealt with in accordance with the laws of our country. (2/3)

And my condolences to the wife of Capt. Maxwell Mahama, his young children & to his mother on the loss of her only son. #RestinPeaceMaxwell

My heart goes out to my brother, Capt. Chubby Adam Mahama (Rtd.) on the murder of his son, Capt. Maxwell Mahama. #RestinPeaceMaxwell.

Ex-President John Dramani Mahama has pledged to take up the responsibility of supporting and nurturing the youngsters left behind by the late Captain Adam Mahama.