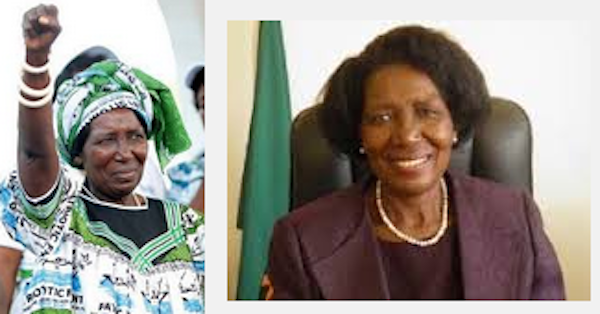 The chairperson and former Minister of Gender Inonge Mutukwa Wina is the new Vice President of the Republic of Zambia.PresidentLungu has appointed Inonge Wina to take over from Dr.Guy Scott. Ms Wina becomes the country’s first ever female Vice President in Zambia.The appointment was announced by President Lungu during his first news conference at State House where he unveiled his initial cabinet.

Wina was wife of deceased MMD chairman Arthur Wina. She also becomes the first female Vice-President in the history of Zambia.

Alexander Chikwanda bounces back as Finance Minister including Harry Kalaba and Joseph Kasonde at Foreign Affairs and Health Ministries respectively.Jean Kapata also retains her position as Tourism Minister with Davies Mwila getting the position of Home Affairs Minister.

President Lungu has also appointed Mr Emmanuel Chilubanama as State House Permanent Secretary with Kaizer Zulu retaining the post of Special Assistant to the Press for Political Affairs.Dawson Kafwaya is the new provincial Minister for North Western Province.Mr Nathiel Mubukwanu is the new Southern Province Minister to replace Daniel Munkombwe.
President Lungu announced that he will make further appointments when he returns from Addis Ababa, Ethiopia for the Africa Union Summit.

“Inonge Wina is a solid person; stood up for the party when we faced possibility of disintegration and going into oblivion,” Lungu said.

Once again congratulations to Inonge Wina! What a History Maker!