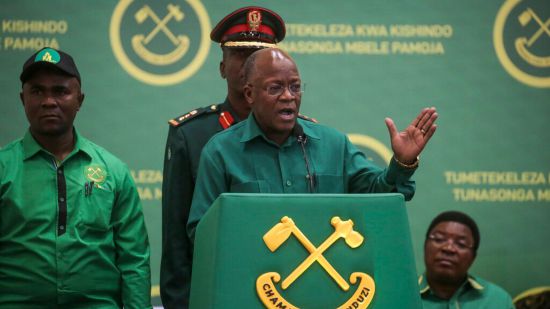 Breaking News: News reaching the public is that Tanzanian President, John Magufuli has passed away, following couple of weeks of disappearing from public life fuelling the speculation of his health.

Vice President of the country, Samia Suluhu Hassan broke the heart-breaking news to the world in a televised address to the nation on Wednesday night.

She indicated that President Magufuli’s death was caused by a heart complications which he was battling for almost a decade and was undergoing medication at Mzena government hospital in the capital of Tanzania since Sunday. He was 61.

She added that the country will observe 2 weeks of national mourning as the state officials and the bereaved family make arrangement for the President’s burial.

Head of states both locally and internationally have expressed their deepest condolences on various social media platforms in honour of the late president.

After February 27, President Magufuli who was usually seen in public was suddenly missing and this sparked rumour that he had been infected with Covid 19 which he’s been sceptical about.

However, leaders of the country boycotted the claims that the president was ill few days ago.

Currently, Vice President Samia Suluhu Hassan is the acting president until her official swearing in as Tanzania’s president.

She will continue the five-year term that Magufuli began serving last year after winning the presidential seat for the second time as stated in the country’s constitution. She will also become the only female president of Tanzania.

Who is President Magufuli?

He was born in 1959 in Chato, north-western of Tanzania to a farmer. He was a teacher by profession who taught mathematics and chemistry at the Sengerema Secondary School in Tanzania from 1982 to 1983.

After a year into his teaching  profession, he decided to quit and got employed by the Nyanza Cooperative Union Limited where he worked as an industrial chemist between 1989 and 1995.

Before he was elected as Tanzanian president in 2015, he was nicknamed “the bulldozer” due to his rigorous and no-nonsense approach to corruption, laziness and money wasting among Tanzanian government officials and channelling a course to road constructions as a Minister of Works, Transport and Communications.

During his first term as president and on his first day in office, he sent a strong warning that he was not going to condone the persistent absenteeism among the country’s civil service.

At the office of the finance minister, he combed for absent workers as well as “ghost workers” and cleared their names from the public payroll. He also expelled officials who he perceived as corrupt and lazy in the eyes of the public.

Another decision he took regarding extravagant spending by government officials was to take down Tanzania’s Independence Day celebration for the first time in 54years to save the country about 4billion Tanzanian shilling, which was the estimated amount that would have been spent for the celebration.

Instead, he ordered for general cleaning which he himself was seen on camera clearing garbage from the streets and stated that the money would rather be used for building of roads.

He was known as the bulldozer president

He dissolved the governing board at the Muhimbili hospital and fired the hospital’s director due to poor services, poor hygiene and lack of equipment maintenance after his unannounced visit to the hospital. He the hospital workers to repair all the spoilt equipment’s.

He cancelled the sitting allowance for officials, reduced state’s dinner budgets from 300million to 25million shillings and ordered that the rest must be used to buy hospital beds and mattresses.

Officials and Engineers of the country were banned from using luxury vehicles under president Magufuli’s administration.

All these actions under his governance was hailed by many Tanzanians and served as a learning grounds for other African leaders in governing their states but, there were also some extreme decisions that the masses didn’t like.

They include banning of live telecast of parliamentary proceedings to save money, ordering for the arrest of a Tanzanian rapper, Nay wa Mitego for his choice of lyrics, suspending newspapers, increasing taxation among several austere regulations in the country.

He was regarded as one of Africans best leader.

Our thoughts and prayers are with the family and Tanzania. RIP President John Magufuli