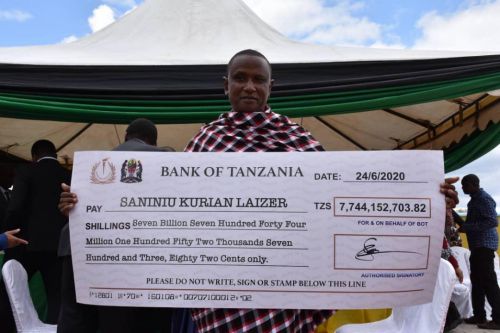 Congratulations are in order! Saniniu Laizer, a Tanzanian small-scale miner has sold one of the scarcest rocks on earth, “Tanzanite” mined in the site of northern Tanzania.

Mr. Saniniu Laizer who mined the most expensive rock in Tanzania last week sold them today to the Tanzanian mining ministry in an open market ceremony in Tanzania.

According to reports, the two Tanzanite rocks unearthed by 52 year  old Mr. Lazier has a combined weight of 15kg (2.3lb) and  worth, 3.4 million dollars. Based on the amount generated from the two mining rocks, Mr. Lazier who is 52.

It  is believed that, it can take as long as 20 years before it might completely deflate.

President of the Republic of Tanzania, John Magufuli sent his congratulatory message to Mr. Laizer by calling him.

President Magufuli has promised to protect the country’s interests in the area of mining as well as increasing the government’s income from the mining sector.

The 52 years old overnight millionaire was given the platform to express his feelings about this accomplishment.

He told the press, he would celebrate his success by slaughtering one of his cows and throw a big party.

He concluded by saying that, he will continue looking after his 2,000 cows and make sure his children oversee the businesses in a proficient manner because he prefers things done in a professional way even though he’s not educated.